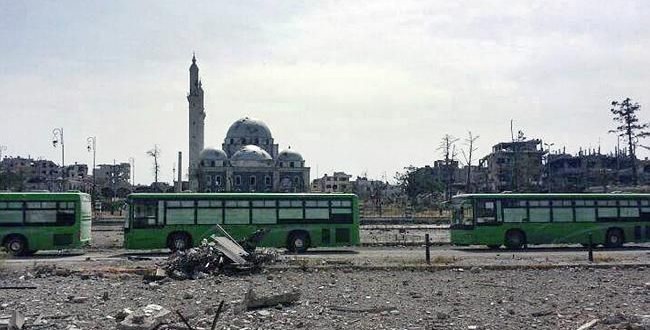 Syria: Rebels withdraw from the Old City in Homs in a historic move

On Friday, the last of the rebel forces evacuated the Old City in Homs, as Syrian army troops entered the city. The move is being seen as a symbolic victory for the government, with civilians slowly finding their way back to the neighborhoods in the city. The pullout sees the rebels now confined to only one district on the outskirts of Homs.

As troops moved in to clear explosives in the Old City, several hundred civilians slowly began returning to the neighborhood, to see what was left of their homes – the area had been bombarded by Assad’s forces for almost two years. Many people were shocked and teary-eyed as the moved over the debris and inspected the ruins.

The last convoy of rebels pulled out after a delay, which lasted for a day. Fighters in Northern Syria were reportedly blocking an aid convoy heading to two pro-regime towns in the Aleppo province besieged by opposition fighters, thereby causing the delay. The delivery of aid was pledged in exchange for unharmed passage for over 2,000 people out of the Old City, most of them rebels.

Governor of Homs Talal al-Barazi said, “We have completed the evacuation of armed men from the Old City of Homs”. Barazi said that of the civilians evacuated, some were sent to the opposition-held town Dar al-Kabirm, some 13 miles north of Homs. He added that negotiations for rebels to leave the Waer neighborhood are also at an advance stage, and that it would happen in the coming weeks.

The evacuation of Homs had begun on Wednesday. According to estimates, 1,630 people, most of them rebels, have already left under the deal. In exchange, opposition fighters in other parts of the country are to release several soldiers, women and children taken hostage in the past few months. The government let the remaining rebels withdraw, with personal weapons intact, in exchange for the release of an Iranian woman, 40 Alawite children and women, and 30 soldiers held hostage in other parts of Syria.

government Old City Syria Rebels women 2014-05-10
Mona
Previous Iraq: 11, including two children, killed as the Iraqi military prepares for an assault on Fallujah
Next A Man of Two World

In  Tehran, court has fined two women $260 for violating the Islamic dress code by …