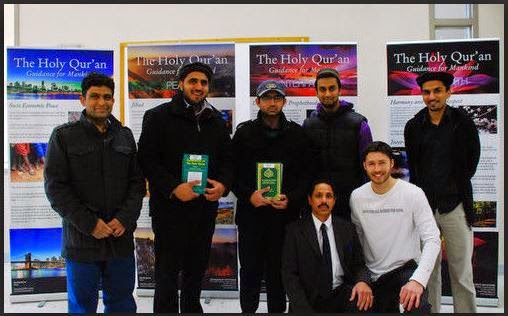 On Saturday the  23rd of  January ,Members of the Ahmadiyya Muslim Youth Association were at the Norwich Library , Ontario  for an Open House To give the Library visitor  a lesson on the teachings of Islam and the Muslim faith.

Ghalib Baten from  Ahmadiyya Muslim Youth Association said  that they are hosting these open houses at smaller communities across Ontario. He added  “We want to show that these attacks that these terrorist groups do are attacks on all of humanity and these ideologies that groups like ISIS are holding have absolutely nothing to do with Islam.”

Baten said that they were very happy with the turnout in Norwich, he added “It went good. People came out and showed interest in Islam. We believe the smaller Muslim populations in small cities have less exposure to Islam and Muslims, and because of that they might have the wrong idea of Islam” .

Baten also said that  the actions of ISIS and other terrorist groups has created myths surrounding Islam which in turn has given rise to hate crimes against Muslims all over the World, including Canada.

He finally added “What we are trying to do with this campaign is reach out to communities who may not be as exposed to Islam as say Toronto or Vancouver, we want to go, so that everyone who doesn’t know a Muslim or knows a Muslim can come and check it out and learn about the religion of Islam and ask questions. The message we hope to convey in Norwich is that Islam is a religion of peace and harmony and Islam is a religion that teaches compassion for mankind and help other people and our goal is to demystify Islam and to remove misconceptions people may have regarding the religion”.

ISIS peace people terrorist 2016-01-26
sherehan
Previous Canada: Syrian refugees greeted by Trudeau as they arrive to Toronto
Next Canada : Soup’s on for newcomers from Syria