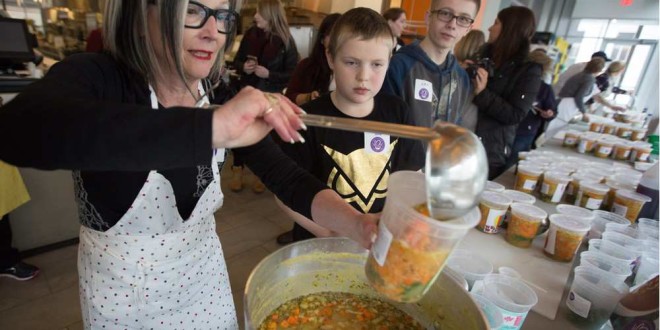 Hundreds of Calgarians came together for preparing soup that will welcome some of the city’s newest residents.

Sharon Hapton, the founder and CEO of Soup Sisters, an organization that brings people together to feed those in need  said “When we knew that we were going to have refugees in need, of not just the comfort of a bowl of soup but the welcoming message that goes with that, we knew we had to do this,”.

Hapton added  that the event lasted for 3 the three days to  produce a substantial amount of soup.

Participants in the soup-a-thon at Bow Valley College donated their time to the endeavour and paid a $25 registration fee to cover all expenses including the soup ingredients.

“We have been sold out for almost two weeks and we have a huge waitlist,” said Hapton. “So many people want to help out and this is such a beautiful hands-on way.” 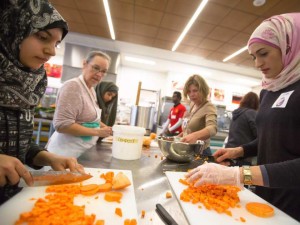 Each hour, a new group of 30 people entered the kitchen to replace the previous team. The participants included families, corporate groups, children as young as six years old, and new Calgarians who recently arrived from Syria.

Hiba Chakil says she brought her two daughters with her to the soup-a-thon so they could experience people coming together to support a good cause.

“Soup Sisters are making soup for the Syrian refugees and I want my kids to see that and to learn from it,” said Chakil. “I want them to, when they get older, be good citizens of this country, to help the community.”

Jewel Swanson has worked with Soup Sisters in the past and enjoys the experience. She said “Doing something I like, making soup for a good cause with my friends, what could be better?,I just think it’s a really good way to make sure people don’t go hungry and to welcome them to Canada.”