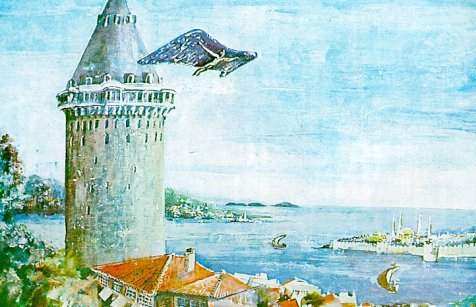 The Travelers of Al-Andalus, Ibn al-Shaykh and the lighthouse of Alexandria

The idea of human flight has always been fascinating. We’ve always looked at the birds, gazed upon the sky, been taken by the stars; never has a physical activity personified human ambition so perfectly. With modern context, it’s a little difficult to imagine the dreams and aspirations of aviation pioneers – their struggles, their failed experiments, their sacrifices, all for what is as easy as clicking a button today. One such pioneer was Ahmed Celebi.

A polymath in the 1600s in Istanbul, Hezarafen Ahmed Celebi in 1630 built a set of glider wings and flew (essentially glide) from the top of the Galata Tower in Istanbul to Doğancılar Square across the Bosphorus strait nearly two miles away. Celebi had successfully calculated the height of the hill, the tower and the distance between the points and made successful altitude adjustments during his flight to successfully complete the flight. He was rewarded with gold coins by Sultan Murad IV after his achievement, but was later exiled after advisors convinced the Sultan that Celebi was a threat to the sultanate.

“First, he practiced by flying over the pulpit of Okmeydanı eight or nine times with eagle wings, using the force of the wind. Then, as Sultan Murad Khan (Murad IV) was watching from the Sinan Pasha mansion at Sarayburnu, he flew from the very top of the Galata Tower (in contemporary Karaköy) and landed in the Doğancılar Square in Üsküdar, with the help of the south-west wind. Then Murad Khan granted him a sack of golden coins, and said: ‘This is a scary man. He is capable of doing anything he wishes. It is not right to keep such people,’ and thus sent him to Algeria on exile. He died there”.

Evliyâ also bestowed the title of Hezarafen (a thousand sciences) on Celebi in his book. As many as three airports are named the “Hezarafen Airfield” in his honour.

In order to model the flight of birds, he created a walkway with an undulating metal strip on either side that described the figure-of-eight pattern of a bird’s wing in flight.

Visitors of the Sultans of Science exhibition can conduct this experiment devised by pioneer Muslim aviator. The “Sultans of Science: 1000 years of knowledge” exhibition is organised by The Ontario Science Centre in collaboration with the Canadian Arab Institute and the Noor Cultural Centre, highlighting important technological and scientific discoveries and advancements made during the Golden Age of Islam.