Breaking News
Home » Arab Achievers » Dr. Fitaihi “Have a Cause, Have a Mission” in Vancouver 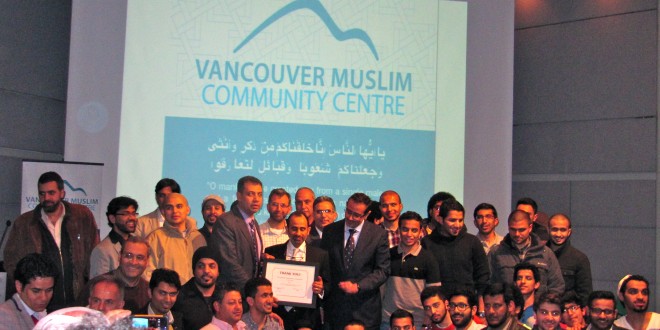 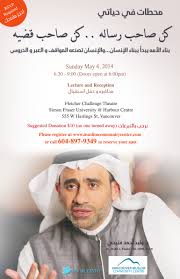 On Sunday, May 4th, the Vancouver Muslim Community center, in coordination with the SFU Centre for the Comparative Study of Muslim Societies and Cultures, organized a lecture by Dr. Walid Fitaihi titled “Have a Cause, Have a Mission”. The lecture has been presented all over the world, including several cities in Europe, North America and Saudi Arabia. According to Dr. Fitaihi, “the lecture aims to present a model to young people, a balanced model, to motivate them to be active in their communities and rebuild our communities and the role of each one of us in restoring glory to our nation”. The lecture was presented mostly in Arabic, with some English interspersed to accommodate a part of the audience.

Dr. Walid Fitaihi, founder, Chairman of the Board of Directors and the Chief Executive Officer of the International Medical Center (IMC) based in Jeddah, Saudi Arabia, has a B.S. in Systems Engineering and (M.D.) from The George Washington University, U.S.A. An American Board Certified physician specializing in Internal Medicine and Endocrinology, Dr. Fitaihi worked as an instructor of medicine at the Harvard Medical School.

A man with great passion and energy, Dr. Fitaihi is not your average physician – he cares about healing the soul as much as he does about healing the body. He works night and day to improve patient’s rights and the quality of healthcare in the Muslim world, starting from Saudi Arabia, his home country.

Dr. Fitaihi was chosen by the ITP group as the CEO of the year in healthcare in the Kingdom of Saudi Arabia for the year 2009. He (IMC) received an award for “Best Hospital Healing Environment” in the Middle East in 2012, recognizing its motto “Healing by Design”. “No patient should have to share a room with another patient, not if I can help it” Dr. Fitaihi affirmed. 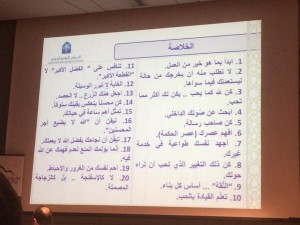 Dr. Fitaihi’s energy and enthusiasm filled the room as he talked about the major events in his life and the lessons he took from them, the role of the mother who shapes our brains to the moments of meditation and noticing Allah’s mercy and guidance. Dr. Fitaihi talked about how true intention is certain to be realized and how reviving inquisitive minds was the reason for all development and invention during the early age of Islam. “A Muslim who does not care and help others is not a real believer, “Dr. Fitaihi stated.

When asked about the role of the new generation, most of whom are educated in the west, he said, “This is one of King Abdullah of Saudi greatest achievements. I believe this over 100,000 students educated around the world are coming back with higher education and more intellect to rebuild our community”. 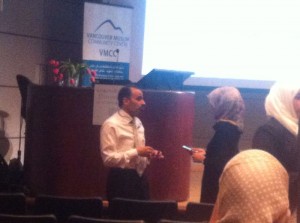 One of Dr. Fitaihi’s missions in life is to establish Islamic health standards. “This is a mission of life. We, defiantly, raised the bar and the level of challenge. The quality standards are more discussed now in the private hospitals for example. These things cannot be noticed in the short term but as (IMC) hospital we had the highest percentage of accuracy (99.8%) in hospitals in Asia, Africa and Europe by the (JCI) Joint Commission International”.

Responding to a question on cooperation throughout the Muslim and Arab world to raise the standards of health and medicine, he said, “we hope for more collaboration but we started with some private and universities hospitals and, God willing, with the new minister of heath we will accomplish more”.

“The lecture was great” one of the attendees said, adding “I wish I brought my kids along, it motivated me”. Some people came from as far as Toronto to attend the lecture, heading back to the airport immediately after it ended.

The idea of human flight has always been fascinating. We’ve always looked at the birds, …