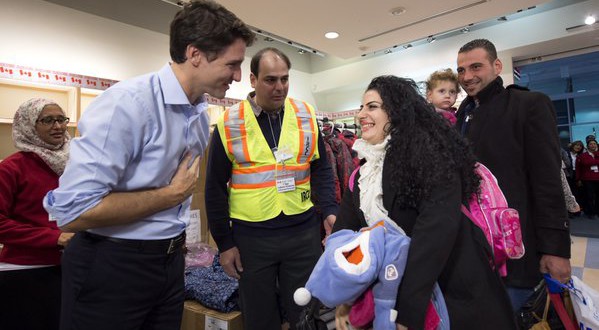 Canada: Syrian refugees greeted by Trudeau as they arrive to Toronto

On Thursday, The first large group of Syrian refugees coming  to Canada by government aircraft arrived in Toronto. Prime Minister Justin Trudeau welcomed the refugees  at a temporary processing centre at Pearson International Airport. The PM was accompanied  by the ministers of immigration, health and defence, as well as Ontario Premier Kathleen Wynne.

Trudeau greeted  the first two families to come through processing and gave them winter coats. The first family was a couple with their baby  girl and the other family  was a man and his wife  with their three daughters. Both families said they are happy to be in Canada.These families will become permanent residents of Canada with social insurance. 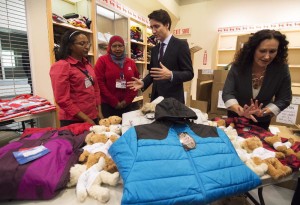 Trudeau  said ,”This is something that we are able to do in this country because we define a Canadian not by a skin color or a language or a religion or a background, but by a shared set of values, aspirations, hopes and dreams that not just Canadians but people around the world share.”

before the flight  arrived, the prime minister thanked the staff and volunteers  who participated in helping and welcoming  the 163 refugees and  said , “So I thank you deeply for being a part of this because this matters. Tonight matters, not just for Canada but for the world.” 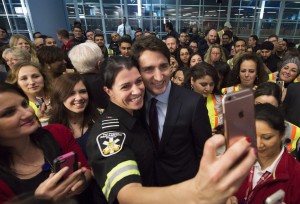 All of the Syrians refugees on board  are sponsored by private groups, many of them had  filed the necessary paperwork months ago in order to bring in some of the estimated 4.3 million Syrians displaced by the ongoing civil war in that country. And More than 400 refugees have already arrived on commercial flights since the Liberals took office on Nov. 4.

This marks the first government aircraft carrying refugees as the government works to fulfil a pledge of bringing in 25,000 refugees by the end of February. Of the 163 people who arrived Thursday, 116 will head to new homes in the Toronto area. Another four will go to Windsor, Ont. Sponsors in Kelowna, B.C. will welcome four, three will go to Coquitlam, B.C. and one to New Westminster, B.C. Twenty are bound for Calgary, Alta., and the final 15 to Edmonton, according to statistics released by the Immigration department.

A second flight is set to arrive in Montreal on Saturday.

A handful of people gathered at the international arrivals gate at Pearson bearing signs and gifts.

Canada Syrian government people refugees 2015-12-11
sherehan
Previous Terrorism and Some Hard Truths for the US
Next Canada: the teachings of Islam in an open house on  Norwich, Ontario