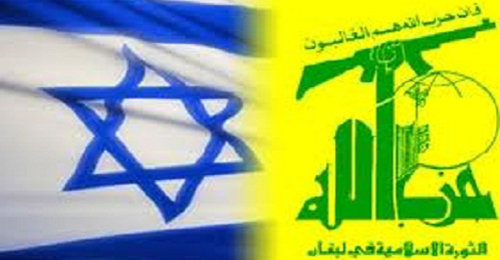 The strategy behind Israel’s attack on Iran and Hizballah

Israel’s claims of an imminent threat of Hizballah attack are not credible. More likely it wants to subdue the Lebanese militia so that it has a free hand to manipulate the Syrian battlefield to its advantage

Israel has good reason to fear that the Lebanese militia Hizballah and Iran’s Revolutionary Guard will seek dramatic revenge for the killing of 12 senior figures from the two organisations in an air strike in Syria on Sunday.

Israel’s concerns were underscored on Wednesday by the decision of its military chief of staff, Benny Gantz, to cancel a trip to meet his European counterparts, as the Israeli army remained on high alert.

Earlier, on Monday, Israel moved an Iron Dome anti-missile battery to the northern border, in case of rocket fire from Hizballah. That is precisely what Hizbullah leader Hassan Nasrallah had vowed only last week if Israel continued to launch attacks on Syrian soil.

General Ali Jafari, commander of the Revolutionary Guard, echoed that warning on Tuesday, saying Israel should wait for “devastating thunderbolts”, and that Israel’s air strike had created “a new beginning point for the imminent collapse of the Zionist regime”.

Rhetoric aside, however, Hizballah and Iran are likely to try to avoid the inevitable direct military confrontation with Israel that would follow a decision to fire some of Hizballah’s thousands of rockets into the Galilee.

That certainly appears to have been Israel’s calculation in launching the attack.

Hizballah and Iran – both stretched militarily in Syria as they try to bolster Bashar al-Assad’s regime from the threat posed by various opposition and extremist groups – have no interest in opening an additional front, this time with Israel.

In addition, Iran is suffering economically from a US-Saudi engineered fall in oil prices and cannot risk an intensification of sanctions – currently being advanced in the US Congress – by being blamed for a major escalation of hostilities with Israel.

Likewise, Iran will be averse to falling into a trap set by Israel, aggravating tensions with western powers as Tehran tries to negotiate a deal with them on its nuclear programme. Israel would be only too delighted to see the talks collapse.

And Iran has invested heavily in arming Hizballah with rockets and missiles to provide a deterrent against Israel launching a strike on Iran. Using that arsenal now, as one Israeli analyst surmised, would be “wasting [it] on border skirmishes that have no strategic significance for Iran”.

Hizballah, meanwhile, will be reluctant to fire rockets for fear of weakening its domestic political position. It has no popular mandate – explicit or implicit – to drag Lebanon into another devastating confrontation with Israel, like the one in 2006, in retaliation for military losses it sustained on Syrian rather than Lebanese soil.

Boutros Harb, Lebanon’s telecoms minister, warned as much: “It’s not in anyone’s interest for a front to be opened [with Israel] and for Lebanon to enter a war.”

More likely Iran and Hizballah will seek revenge at a later time, either by attacking Israel from Syria or by hitting a high-level target abroad. Such a strike could itself escalate into a wider conflict, as occurred both in Lebanon in 2006 and in Gaza with Hamas last summer.

It is not surprising that Quneitra province, the area of southern Syria next to the Israeli-occupied Golan Heights where Israel’s air strike occurred, has become a flashpoint. Israel, on the one hand, and Hizballah and Iran, on the other, have been sucked into the relative power vacuum created there since the Syrian army lost its grip on the territory last summer.

Al-Nusra Front, an al-Qaeda affiliate, is reported to have strongholds in the area and controls the Quneitra crossing on the 1967 ceasefire line with the Golan Heights.

Israel has engaged in a range of activities in the Quneitra region in support of the rebel groups.

It appears to have been quietly trying to gain a foothold by recruiting collaborators among the local population, in what Hizballah fears may eventually become a replication in Syria of the South Lebanon Army, a militia Israel created to help destabilise southern Lebanon throughout the 1980s and 1990s.

Israel has also assisted rebel groups, including al-Nusra Front, allowing its wounded fighters to access its medical services, as a report last month by United Nations monitors in the area confirmed. Israel is also said to have been arming and training these groups, and providing them with maps and intelligence. The strong suspicion is that Israel is trying to forge links with these fighters to help them attack Hizballah and the Syrian army.

According to some reports, Israel’s downing of a Syrian military aircraft over the Golan Heights in late September was intended to aid al-Nusra Front as it fought for control of Quneitra crossing.

And most visibly, Israel has carried out a series of air strikes against targets in Syria, of which Sunday’s was only the latest. The Israeli media have claimed that the earlier attacks were designed to stop Syria and Iran transferring weapons to Hizballah to strengthen its fighters as they take on opposition forces. However, there are also reports that Israel is trying to weaken Syria’s military infrastructure to assist the rebels and give its own aircraft unhindered access to Syria’s skies.

However unlikely the alliance may seem, there are strategic reasons why Israel might wish to help al-Nusra Front and even the more extremist fighters of the Islamic State group.

Israel appears to prefer that the Syrian army, Hizballah and Iran remain trapped in an endless struggle against the opposition – whatever their hue – that saps their resources and military strength, leaving Israel to control the playing field.

Hizballah, by contrast, has every reason to want to cement its position in southern Syria. Nasrallah and Assad received a nasty wake-up call last summer when the rebels seized Syrian positions in the Quneitra area.

Sunni opposition forces thereby gained control both of the border with the Golan Heights, giving them access to Israel, and moved into position next to south Lebanon, home to much of Lebanon’s Shia majority and Hizballah’s heartland.

For this reason, Israeli leaks to the media that Hizballah and Iran have been trying to establish missile bases in the Quneitra area cannot be discounted.

However, claims from Israel that it was under imminent threat of a Hizballah attack from the Quneitra area – justifying the strike – are implausible. If Hizballah is now averse, as seems to be the case, to hitting Israel after it killed so many of its commanders, why would it have been preparing to attack Israel before the strike, when it had far less cause?

Israel appears to prefer that the Syrian army, Hizballah and Iran remain trapped in an endless struggle against the opposition.
More likely, the team were there to assess ways to tighten their hold on the area, compensating for Syria’s weakness, to prevent both further territorial losses to opposition forces and Israel’s continuing military interference.

Veteran Israeli military analyst Alex Fishman observed: “The Iranians and the Syrians reached the conclusion that Israel is no longer deterred on the Syrian front and is carrying on uninhibited.” For this reason, they are under pressure to create a new “balance of deterrence” with Israel.

Israel’s Channel 2 TV quoted Lebanese sources on Tuesday confirming that the team were establishing missile bases in southern Syria, presumably with Assad’s assent. If that was the case, then most likely the goal was to create a stockpile of rockets similar to the one that exists in south Lebanon to deter Israel both from striking in Syria and from helping rebel groups.

Israel’s desire to stop Hizballah and Iran’s counter-move – and thereby keep its free hand in Syria, launching attacks when it pleases – seems a more probable explanation for its attack on Sunday.