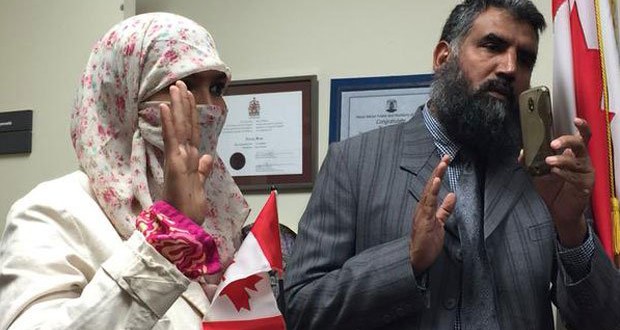 Zunera Ishaq, the 29 yers old woman who won the legal right to wear niqab during her citizenship ceremonies  has officially become Canadian. She was granted citizenship in Mississauga.

Her lawyer Lorne Waldman  said that Before the oath she was taken into a room and identified heself and took off her veil in front of a female officer . After that, we went into the office of the judge and performed the full ceremony”.

He added ,“The judge made a very moving statement about what it means to be a Canadian…and then she was given her certificate, she signed her oath card, which every Canadian has to do, and then after that we all sang O Canada.”

Zunera’s case controversy  start in  2011  after the Conservative government banned new Canadians from wearing face coverings during  citizenship ceremonies. She refused to follow the policy  on religious grounds, and  she ended before The Federal Court of Canada which found the policy unlawful in February, and the Federal Court of Appeal  lately upheld the ruling.

The government has refused the ruling and announced that the issue will be taken to the Supreme Court of Canada. Also ,Prime Minister Stephen Harper has consistently argued that showing one’s face at the moment of becoming a Canadian citizen is consistent with Canada’s values and a necessary measure to ensure national security.