Breaking News
Home » Breaking News » Stuck in Area A: How We Were Duped into Disowning the Palestinians 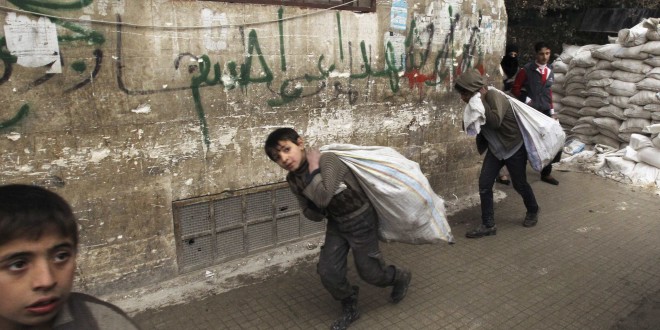 Stuck in Area A: How We Were Duped into Disowning the Palestinians

Are you surprised that there has been little mobilization to help Yarmouk, the Palestinian refugee camp on the outskirts of Damascus, which is overrun by militants, and besieged by the Syrian army? Palestinians – and Syrians – there are killed in a myriad of ways, including starvation.

I am not surprised. Even before Palestinian refugees found themselves embroiled in Syria’s conflict, I appealed to all parties involved, including the Palestinian leaderships (alas, there are several) to spare the refugees the burden of war, and for Palestinians to set their differences aside to avoid a repeat of Lebanon, Kuwait and Iraq.

Nothing happened, as if recent history was of no consequence and offered no lesson. Hamas was stuck in Gaza, in a real and figurative sense – its attempt at regional politicking was a failure, and is, like 1.7 million refugees is reeling under siege. Mahmoud Abbas, his Palestinian Authority and whatever branch of his Fatah party currently at the helm is stuck in his Area A – a supposedly self-governed region that constitutes about 3 percent of the West Bank. While the Israeli army can still raid Area A, made mostly of densely populated cities – arresting Palestinians at well – Abbas is entrusted in managing the affairs of the Palestinians there, which should have been an Israeli responsibility as an Occupying Power, under the Geneva Conventions.

Area B, which is under joint security control between Israel and the PA consumed about 23-25 percent of the West Bank – comprised mostly of nearly 400 hundred Palestinian villages that are virtually under Israeli control. But a whopping 72 percent of the West Bank is under Israeli control, that’s where the settlements are mostly located, and the Israeli military rules with an iron fist.

While Israel sees the entirety of Palestine as its geographic domain, and the whole Middle East region as its political and security domains, Abbas is merrily stuck in Area A – 3 percent of the West Bank and less than one percent of the total size of historic Palestine. Area A is his bread and butter, his reason for existence as a ‘President’ ruling over a population trapped by Israeli walls and checkpoints, Israel-PA security coordination and the humiliating need for a paycheck at the end of each month.

But while many of us were focused on discrediting Oslo and its defeatist culture, we too are stuck in Area A. We cannot break free from reducing Palestine and the Palestinian people and millions of Palestinian refugees to Area A. We didn’t do this out of malice, or because we don’t care of Yarmouk in Syria, Ein al-Hilweh in Lebanon or Baladiat in Iraq. As we labored to discredit Oslo, we had no unifying vision outside the confines of Oslo, thus, were trapped in its disempowering language and impossible geography.

There is much history behind this, and I will try to spare you the details. But an incident that took place over ten years registered deeply in my mind. Then I was working for a human rights NGO in London when a man with a distraught voice called our office. “Help me, for Allah’s stake, please help me,” he cried. Literally, he was weeping. My attempt to comfort him failed. He called me using a borrowed cell phone from a rights worker at a refugee camp between Iraq and Jordan. His two brothers were murdered in the Palestinian Baladiat neighborhood in Baghdad, one by the Shiite militias, one by the Americans.

But when he attempted to seek safety in Jordan, the Jordanians denied him entry. Palestinian refugees have strange and most precious status, irrelevant travel documents that make it extremely hard to travel. His papers were the wrong kind. He was at the desert camp for too many months. I tried, but could do nothing for him.

His problem, like that of the Yarmouk refugees, is that he fell out of favor with politics, with geography, with any applicable human rights. As if he fell out of favor with life altogether. The only relevant document was the Right of Return for Palestinian refugees enshrined in UN Resolution 194. The latter however is a document, cited generously by researchers and activists, but carries no actual weight for the refugees of Baladiat – as hundreds of them perished in the US invasion – or for the 18,000 refugees remain trapped in Damascus.

Yet the process of fragmenting Palestine is as old as the conflict, and has been dictated largely by Israel, as many of us, including Israel’s detractors followed suit, unknowing that they are contributing to the very process that meant to marginalize numerous Palestinian communities.

When Israel occupied East Jerusalem, the West Bank and Gaza, we spoke of “Palestinian territories” not Palestine. Progressively, Palestinians who are citizens of Israel, were dropped from the Palestinian and Arab political discourse as if they ceased being Palestinian.

When Oslo was signed, we borrowed its deliberately despairing terminologies and confusing geography of Areas A, B and C.

We speak of Gaza when Israel bombs Gaza. In fact, Gaza became central to the Palestine discourse just after the Israeli siege in 2007. Prior to that it was an addendum in a political language centered mostly in the West Bank, primarily in Ramallah, the seat of the throne of Area A.

We are trapped in Israeli definitions; thus when Palestinians are starved, beheaded or blown to smithereens in Yarmouk, we stand puzzled. We offer sympathy, tears and little action. We cannot even articulate a coherent discourse, aside from pulling out UN Resolution 194 from some dusty archive to talk about the Right of Return, and how the suffering in Yarmouk is ultimately Israel’s responsibility. Proud by our efforts, we carry on with life as if we saved the refugees, all at once, with a single link to a UN website.

When Israel carried out its war on Gaza last summer, nearly 150,000 people protested in London in another massive show of solidarity, duplicated in many cities across the world. For Yarmouk, about 40 people showed up, an admirable effort, but expressive of the fact that the refugees no longer exist at the heart of the Palestine discourse.

In the constant attempt at exposing Israeli injustices against Palestinians, most of us were duped into an Israeli-PA attempt at reducing Palestine into a tiny margin of its actual physical and political spaces that extends from Palestine – the entirety of Palestine – all across the Middle East, hovering above Yarmouk, as it has for many years, without us noticing.

We are trapped in Area A, making an occasional crossover to Areas B and C, only to get back to Area A, where it is relatively safe and easy to fathom and explain. We are stuck behind Israeli walls and checkpoints as we are failing to see the massive space that is Palestine, and the millions of refugees still holding on tattered deeds and rusty keys, since we promised that that their Right of Return is paramount.

Did we lie? Were we lied to? It is more like we were duped into pseudo-reality crafted so proficiently by Israel, and we are finding it extremely difficult to break away from its confines.

But if our hate for the Israeli occupation, and our loathing of Israeli policies are greater than our love for the Palestinians, all of them, starting with the refugees dying in Yarmouk, then, perhaps, it is time to reconsider our understanding and relationship with the conflict altogether.

– Ramzy Baroud – www.ramzybaroud.net – is an internationally-syndicated columnist, a media consultant, an author of several books and the founder of PalestineChronicle.com. He is currently completing his PhD studies at the University of Exeter. His latest book is My Father Was a Freedom Fighter: Gaza’s Untold Story (Pluto Press, London).
iraq palestine refugees West Bank 2015-04-23
Mona
Previous In Islam, Every Day is Earth Day
Next Professors for Israel try to shut down Lancet