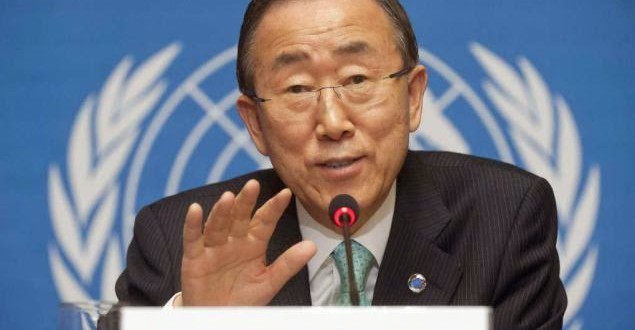 UN to rebuild Gaza for “the last time”

The United Nations Secretary General Ban Ki-moon on Wednesday said that the UN is willing to help Gaza rebuild, but warned that it would be the last time they would offer their help.

He opened a special meeting of the UN General Assembly by appealing for a more permanent ceasefire as the 72-hour truce deal between Hamas and Israel held truce for a second day.

“The senseless cycle of suffering in Gaza and the West Bank, as well as in Israel must end”, he said.
After three wars in the Palestinian enclave in the past six years, ban also warned that the world is losing patience with both the Israelis and the Palestinians.

“Do we have to continue like this — build, destroy, and build and destroy?We will build again but this must be the last time — to rebuild. This must stop now”, he said.

Twenty-nine days of fighting in the Palestinian Enclave has led to the deaths of 1,875 Palestinians. Around 500,000 Palestinians have been displaced by the violence. Robert Serry, the UN’s Middle East envoy, said that the death toll and destruction from the latest conflict was worse than it was in the 2008-09 conflict.

The General Assembly was gathered at the request of several Arab nations who had criticized the UN Security Council for not adopting a strong resolution to press Hamas and Israel to stop. Jordan had circulated a draft resolution in the UN Security Council calling for a truce, a lift on the blockade of Gaza and a probe on Israeli strikes on UN-run schools where displaced civilians had sought shelter. The resolution has not been put to a vote yet.

On July 27th, the fifteen-member Council released a statement that called for a ceasefire and expressed its support for Egyptian mediation efforts after the US dropped its reservations that the statement will single Israel out.