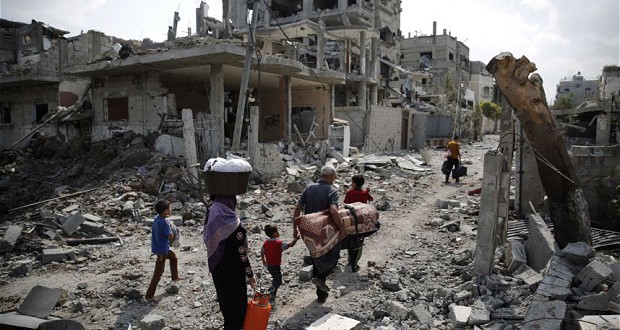 Wednesday marked the second day of a temporary return to normalcy in the Gaza Strip as the 72-hour ceasefire held on. Meanwhile, Egyptian negotiators continued to engage in shuttle diplomacy as it looks to extend the ceasefire.

Markets, banks and shops reopened in Gaza, with residents looking more confident than they did on Tuesday, when the ceasefire began; small businesses re-opened and fishermen headed out to sea for the first time in weeks.

Citizens started repairing property damaged during the assault, as emergency services got rid of rubble and looked for bodies in most-affected areas like Shejaiya, Beit Hanun and Tuffah.

Over 500,000 Palestinians in Gaza, which has a population of 1.8 million people, have been displaced by the Israeli aggression, with many seeking shelter in schools.Taysir Amro, Palestine’s Deputy Economy Minister, estimated that damages due to the Israeli aggression amount to $6 billion.

Diplomats in Cairo accelerated efforts to secure a permanent truce deal after mediators met the Israeli delegation overnight and relayed their demands to the Palestinian delegation. Egyptian officials, who likely have been receiving advice from the United States, will probably face tough talks as the Palestinians and Israelis press on conflicting demands.

Palestinian diplomats say that they will respond to Israeli terms throughEgyptian intelligence officials. However, top Hamas officials have already signaled that they will not give in to Israel’s demands.

Ismail Haniya, second-in-command of the Hamas political bureau and Former Prime Minister of Gaza, was defiant ahead of the negotiations.

“Our delegation to Cairo has a united people behind it, a valiant resistance and huge sacrifices, and it will not yield on any of our demands”, he said in his statement.

Ezzat al-Rishq, a senior member of Hamas, also seemed to reject Israeli demand that Gaza should be disarmed.
“We will not listen to any proposal on this matter”, he said.

He also took to his Twitter account, saying, “Whoever tries to take our weapons, we will take his life”.