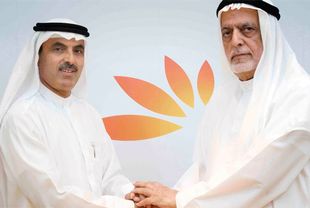 Leading United Arab Emirates businessman Abdullah Ahmed al-Ghurair has donated a third of his assets to an educational foundation as part of a charity drive, he said on Tuesday.

Ghurair is the father of billionaire Abdulaziz al-Ghurair, chief executive of Dubai-based Mashreq bank , one of the emirate’s biggest lenders.

Ghurair said in a  news conference that  The foundation will initially aim to spend 4.2 billion dirhams ($1.1 billion) over the next 10 years on educating underprivileged UAE and Arab youths.

The foundation will “equip Arab youth with the knowledge and skills they need to become the leaders of tomorrow, and drive the sustainable development of their communities”, a family statement said.

the statement added “It will invest in innovative high-impact programmes that improve the quality of education at the primary and secondary levels, while also helping a minimum of 15,000 promising Arab youth from underprivileged backgrounds pursue quality higher education”.

Mr Abdulaziz  the chief executive of  Mashreq, said he hoped to appoint a board of trustees imminently and begin charitable operations in the first quarter of next year.The first phase would aim to provide 15,000 scholarships to Emirati students hoping to study at top universities around the world. In the next phase the foundation’s resources will be opened to non-Emirati Arabs in the UAE, and later to Arab students across the region.

He added  “The foundation will forge a path for greater collaboration between philanthropic organisations, the private sector and education institutions…The bold ambitions of the UAE and our neighbouring Arab countries can only be realized if our region’s future leaders are given the necessary tools.”

The foundation said: “Access and the quality of education at all education levels in the Arab world lags behind the most developed regions and, according to the United Nations Educational, Scientific & Cultural Organisation (Unesco), less than a third of high school graduates in the Arab states are enrolled in tertiary education, below the world average. That compares with 70 per cent in western Europe and North America.”

The foundation said that it will award grants based on a highly competitive process. It also added that it will work in partnership with the best education institutions in the region and the world. And will promote academic subjects that address the needs of the local and global economy and the priorities of nation building. Grants for higher education will be made through a clear and transparent process and awarded based on merit to Emirati and Arab youth in need of financial assistance.

The Al Ghurair family is one of the oldest and wealthiest of the merchant families that emerged in the UAE. With interests in construction, real estate, retailing and food, Forbes magazine estimated family wealth at a total of Dh17bn last year.