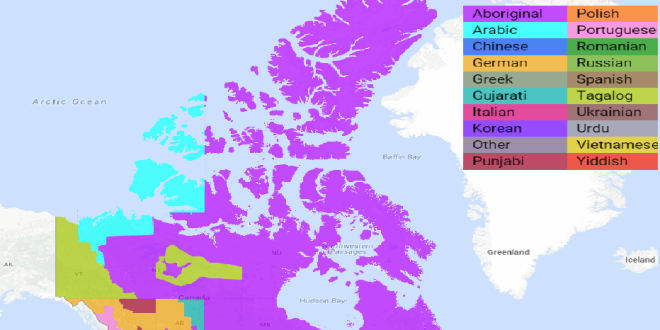 The 10 and 3  produced an interactive map that shows which languages are spoken most often at home besides the country’s official languages English and French .

The  map is  separating the country into “census divisions.” They then discerned a language’s popularity by looking at the number of people who speak it at home within those regions.

For much of the country, the tongue most spoken at home is any number of traditional indigenous languages, such as Inuktitut, Cree, Dene and Ojibway. This is particularly true in regions including Nunavut, the Northwest Territories, Manitoba, northern Ontario, Quebec and Labrador.

But though  in  northern Canada Arabic is among the most prominent languages spoken in the home in those parts. The research found that Arabic’s prevalence in parts of the Northwest Territories is only one per cent. But among languages that aren’t English or French, it has a prevalence of 32 per cent.

Inuvik, N.W.T. is home to a community of Muslims that has proliferated since the early ’90s when people sought economic opportunities. The community has grown enough that a mosque with a 10-metre minaret, dubbed the “little mosque on the tundra,” was built there in 2010. It’s been called the world’s northernmost mosque.