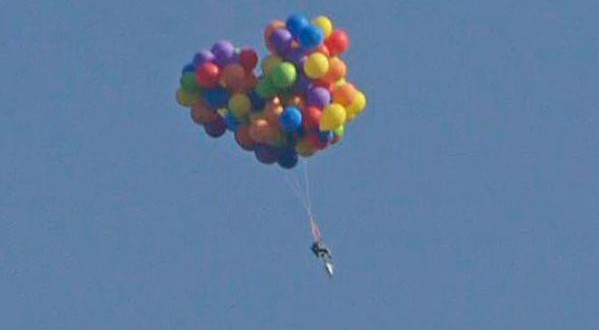 Canada: Man arrested after tying helium balloons to chair and flying over Calgary

A  Canadian man  was arrested after he tied more than 100 helium balloons to a lawn chair and used it to fly over Calgary.

Daniel Boria, 26, told police that he was planning on parachuting into the Calgary Stampede, a rodeo event, to promote his cleaning-products company.

Boria jumped from the chair and opened a parachute attached to his back. Upon landing, he was arrested and has been charged with mischief causing danger to life and he could face further charges. later, He has been released on bail.

The lawn chair kept flying, and still has yet to be found.

Boria reportedly used 120 over-sized party balloons and about 10000 Dollars worth of helium.

He added that he sought training as a skydiver beforehand and only turned to helium after being unable to find a pilot willing to support his efforts.

he said on  the police reaction “I did anticipate they would be a little upset…It’s already worse than I thought it would be.”