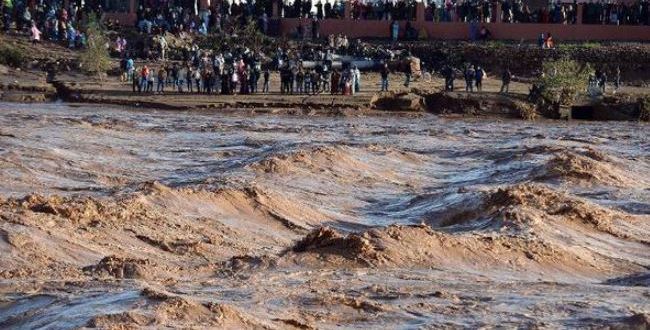 Floods in Morocco triggered by torrential rains have left 11 people dead, a local television state reported on Monday, only a week after a storm had killed 36 people.

Storms lashed the south of Morocco yet again, with resort town Agadir experiencing over 10 inches (250 millimeters) of rainfall, equivalent to a year’s worth of rain, from Friday to Sunday. The bad weather finally eased up on Monday, leading to many rivers bursting through banks and causing extensive damage, especially in the Guelmim-Es Semara region, some 200 kilometers to the south of Agadir, which was declared as a disaster area; whole districts in the region have been under water after dikes were breached.

2M public television channel said the storm had killed eleven people; it cited an “authorized source” on the numbers since an official national death toll has not been released yet. Earlier reports had suggested that seven people had been killed – “Another catastrophe: floods kill seven”, Arabic daily Al-Massae headlined its story.

Both At-Tajdid and Al-Massae cited “anonymous official sources” and said that two college students had drowned on Friday in the Azilal province near the Anti-Atlas mountain range, and a youngster was swept away near the city of Marrakesh. Akhbar al-Youm and Al-Massae also reported that a woman and her child were killed when a house collapsed near the town of Figuig; Akhbar al-Youm said that the death toll stood at five.

According to the Al-Ittihad Al Ichtiraki, material damage ran into “billions” of dirhams, or in some millions of dollars. Several thousands of homes have either been completely destroyed or heavily damaged, power networks damaged and roads cut, authorities said, adding that over 250 villages have been cut off.

2M television reported that an air bridge has been set up between Guelmin and Sidi Ifni “to provide assistance to populations surrounded by floods”.