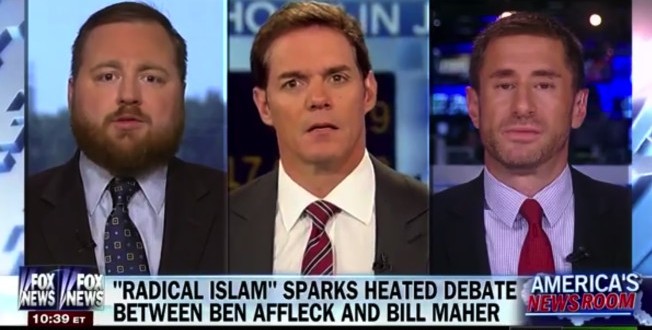 “Real Time” host Maher had on Friday argued that Islam “is the only religion that acts like the mafia” and said that the “vast numbers of Muslims want humans to die for holding a different idea”.

In a news segment about the remarks, Hemmer, battled two guests who criticized Maher for characterizing one billion people as members of a “mafia” who “will f-ing kill you” over the actions of a few.

However, Hemmer angrily insisted that Maher was accurate, asking his guests, “How do you define what’s bigotry and what’s just reality?”

While the two tried to refute his argument, Hemmer interjected, saying that they were “missing the point here” and that Maher was “arguing about 2014”, implying that Islam is currently overflowing with terrorists.

One of the guests, Bernard Whitman, pointed out that Maher had “indicted a billion Muslims with that comment”, before Hemmer interrupted in frustration saying, “I can’t believe I’m defending Bill Maher!”, saying that he had referred only to “radical Islam”.

“The issue is not the religion of Islam, the issue is the politicization in the Islamic organizations that are using Islam as a crutch and as a shield to hide their true terrorist nature”, Whitman responded.

Almost all Muslim leaders in the world and every American Muslim organization have condemned both the actions and the ideology of extremist group Islamic State (IS) and all terrorists. Fox News has a lot of history of “Islamophobia” – Fox host Steve Doocy once claimed that US President Barack Obama attended a “madrassa” and was possibly an extremist. Brian Kilmeade once suggested “special screenings” for Muslim American soldiers after shooting in Fort Hood in 2009; on a different instance, he had linked commonly-used phrase “Allahu Akbar” with terrorism. Most recently, Fox host Bill O’Reilly had criticized released American soldier Bowe Bergdahl’s father from his beard, saying that he looked too much like a Muslim.