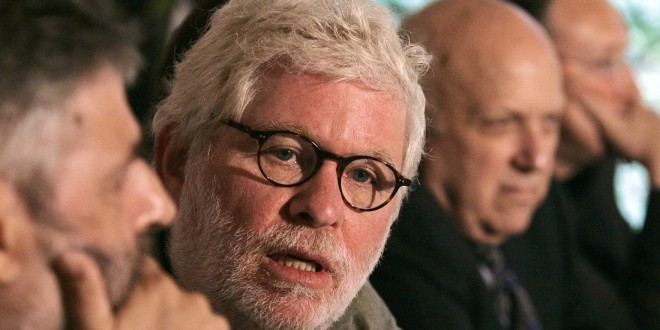 By Philip Weiss- MONDOWEISS
Washington Post columnist Richard Cohen says that the Palestinians are to blame for the Nakba, the ethnic cleansing of Palestine in 1948 in which 750,000 Palestinians were expelled by or fled Zionist militias and were never allowed to return. In his new book Israel: Is It Good for the Jews? Cohen says that by resisting the Zionist movement to take their lands, the Palestinians gave the Jewish immigrants, with their “advanced culture,” no choice but to force them from their homes.

Cohen makes a full-throated argument for ethnic cleansing as the only rational outcome:

They simply had to be pushed out. The very people who had made war—who had initiated the war and sometimes conducted it in barbaric fashion—could not be permitted to stay in place or to return to their old homes. This was not a case of racism or colonialism but of security based on common sense. The Palestinian was the enemy, and the enemy had to go. The Washington Post columnist has gotten in trouble in recent years for blunt comments about black people that have widely been viewed as racist– lately saying that “conventional” people “gag” when they see interracial couples. On a couple of occasions he has apologized.

Cohen’s hardboiled comments about the Nakba in his new book are also sure to offend. In a lengthy historical section, Cohen defends the practice of ethnic cleansing, saying that it may be necessary in certain circumstances to prevent ethnic clashes.

The section reads like a parody of a Zionist apology, to the point that it may damage Cohen’s own cause. Titled “Ethnic Cleansing for a Better World,” one chapter argues that Jews in Palestine were only doing what great powers in Europe were doing, sometimes to Jews.

“Why were they not entitled to play by the rules others had established? They had to use power and force and violence too. Sorry, it was unavoidable.”

Cohen’s fiercely realist tone seems anachronistic– ignoring advances in international law in the intervening 70 years– when he describes the many ethnic cleansings that took place in Europe during and after World War II.

Population transfers were in the air. A good many figures in public life supported them, Churchill being the most prominent of all. ‘Expulsion is the method which, insofar as we have been able to see, will be the most satisfactory and last.’

A policy of forcing ethnic Germans out of Poland, Czechoslovakia and Hungary back to Germany was “brutal” but it “worked,” Cohen says.

Except for the Balkans and the occasional victimization of the Romani (Gypsies), Eastern Europe has been largely free of ethnic strife since the 1950s, and, afterward, largely free of discussing how that was accomplished.

Cohen all but endorses ethnic cleansing as a reasonable solution, when he cites the transfers between Greece and Turkey of minority ethnic populations:

[B]y the twentieth century, the barbarism of population transfers had become accepted government policy. It was a solution, no matter how ugly, to the problem of certain people being in certain places – a coldly pragmatic way of dealing with a combustible mix of peoples…. Once Christian Greeks had become disentangled from Muslim Turks, they ceased killing one another…. The lesson from this, the first significant population transfer of the twentieth century, was that ethnic cleansing worked.

That historical backdrop justifies the Nakba:

In his next chapter, on the Nakba of 1948, Cohen states that Zionists came unwanted into Palestinian land and that Palestinians were right to mistrust their motivation, even if some Jews had deluded themselves that everyone was gonig to coexist. The fact that 770,000 Palestinians were driven from their homes was inevitable and even to the good, he argues.

[T]he facts are the facts: European Jews, no matter how noble their cause, established themselves in a part of the world occupied by another people and, by dint of their advanced culture… forced those occupants to make way. This, essentially, is the argument made by the enemies of Zionism, and they are right.

But once you agree that Israel had a right to exist–

then you are stuck with what for some is an unpalatable reality: the nascent state simply could not afford a large and hostile minority/majority within its borders.”

That reality is not unpalatable for Cohen. Once Palestinians resisted the Zionist efforts to establish a state on their lands, it became “clear that the Palestinians had to go.” And other colonial solutions for an indigenous population wouldn’t work here: they couldn’t be put on reservations or go to Bantustans and townships, or be sent to an ancestral homeland.

They simply had to be pushed out. The very people who had made war—who had initiated the war and sometimes conducted it in barbaric fashion—could not be permitted to stay in place or to return to their old homes. This was not a case of racism or colonialism but of security based on common sense. The Palestinian was the enemy, and the enemy had to go…

The point in defending (or, as I prefer, explaining) what Jews did to Palestinians is not to suggest that it was virtuous because it was common—because others did it—but rather to emphasize that others did do it. And while they sometimes did it out of vengeance or for the sheer ugly fun of it, they more often did it because they had to or because they thought they had to. The tribes of the world sometimes get along, but more often they do not… Had these Jews not foisted the nakba on the Palestinians, the state would not have survived. It is one thing, of course, to hold that the state should not have survived—that it was nothing other than a racist, colonialist enterprise—but should you hold otherwise, then you have bought into a chain of events that entails a certain amount of ethnic cleansing.

But Cohen insists that Palestinians bear responsibility for their own expulsion:

Once again, the driver of events was not, as is almost universally argued, the Jews, but the Arabs. …. Had the Palestinians acceded to the wishes of the international community, they would have come to predominate in the new Israel.

Instead of being 20 percent of the population as they are today, Cohen says, Palestinians might be a majority. “The Jewish state might not be Jewish after all.” Israel would be an Arab state or an apartheid state.

Cohen says that he would have objected if Israel had chosen “sheer expulsion,” the forcing of the entire Palestinian population out of the borders of the new state.

[I]f I were writing at the time, I would have condemned it vociferously. But it would have worked. Israel would now be as Jewish as the Czech Republic is Czech or Hungary is Hungarian.

In the same grim realistic tone, Cohen says that Israel is not likely to survive as a Jewish state. There are too many Palestinians inside Israel and too many secular Israelis fleeing the country for it to retain a Jewish majority. And the raison-d’etre for the Jewish state– the Holocaust in which Cohen lost many relatives– has faded from the world’s memory, giving way to an era in which Israeli abuses against Palestinians under occupation are causing the state to lose legitimacy. Though he ends up calling for the world to support Israel, Cohen is pessimistic about Israel’s chances.