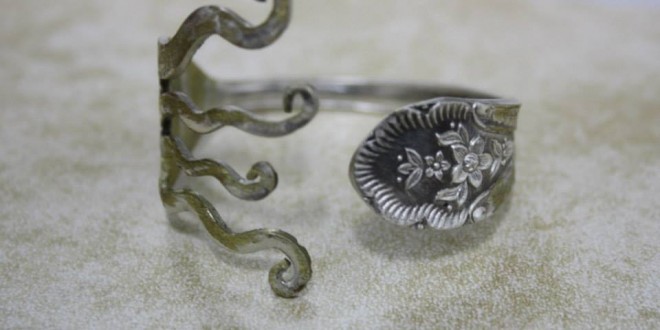 “Hi, I’m Ala from Bethlehem. I do upcycling.” A friendly man in his early thirties, the curly hair bound to a plait, greets the

camera. It is the first scene of the Indiegogo-Crowdfunding video Ala Hilu created to start his project: a workshop dedicated to upcycling in the Bethlehem area. For this he needs space and tools. Why upcycling? “Trash is everywhere here”, Ala explains in the video, standing amongst plastic bags and bottles next to a walkway. The campaign raises $5.570.

Months later the new workshop is set up. ‘ReSign’, a mixture of recycling and design, is the first initiative in the West Bank that focuses solely on the reuse of waste as a raw material. The money raised in the campaign helped Ala to rent a place in Beit Sahour and buy a variety of tools to start his work. From loads of old bottles, metal and other kind of garbage he produces jewelry, drinking cups and a lot more. “The very basic vision is to get out of the box. When you are talking about upcycling you have to have this thought: There is nothing called trash. It is basically material”, he explains.

And material there is. According to a 2009 report by the Applied Research Institute – Jerusalem (ARIJ), about 1.7 tons of household garbage is produced daily in the West Bank. And this number is expected to grow by 4 percent annually. But as the collection of solid waste only covers about 70 percent of the West Bank, garbage is left in the streets and hundreds of illegal and unmonitored dumpsites have developed. One outcome is groundwater pollution while the burning of waste at these dumpsites constitutes a direct threat to the health of area residents. Already in 2003 the United Nations Environment Programme (UNEP) mentioned the production of hazardous dioxins and furans by this practice.

Ala is well aware that his little workshop is not capable of resolving this ongoing problem. At the moment he is selling his products on demand and is engaged in the renewal of a café with upcycled material. But his real aim is raising awareness. To Ala, ReSign is an “experimental lab around upcycling and

environmental issues – and art. An open space, where you can create.” Currently he talks about future projects with schools, NGOs as well as companies. His broadest aim is to challenge the consumerist, throw-away-culture.

The importance of a project like ReSign is strengthened by the latest national strategy paper of the Palestinian Authority on solid waste management. The paper states that though many Palestinians are aware of the results of waste pollution, “many negative societal behaviors, that have implications on the health, environment, and image of the Palestinian community, still exist.” An extensive study by ARIJ from 2005 also mentions the necessity of people’s willingness to successfully implement an environmentally successful waste management.

Still, embedded in the political conflict of the Israeli occupation of the West Bank, a project like this might seem of less importance to some.

Ala rejects this idea. “The political situation is there. At the same time you can’t just ignore one thing on account of another. I can’t just stop my life because there is occupation. And the main reason for the ReSign project is that there is a need for this here – as there is a need for recycling and upcycling in any area, conflict or not, in the world”. And due to the health implications of waste, the PA strategy paper declares the development of a sustainable waste disposal system as a national priority.

However, the Israeli occupation adds to the problem as checkpoints cause disruptions of waste transports and restrict access to dumpsites. Restrictions in the West Bank’s Area C and the building of the Separation Wall exacerbated this situation, the 2005 ARIJ report states. The geographic division of the West Bank in cases leads to the impossibility of shared dumpsites for several municipalities, further increasing the spread of ’emergency’ dumpsites. Moreover, both UNEP and the PA report on Israel’s abuse of the occupied Palestinian territories for disposal of hazardous Israeli waste.

Waste pollution in Palestine is accordingly a problem that needs to be assessed from different angles. Ala’s ReSign project therefore forms part of the wider GrassRoots Environmental Action Network, GREAN Palestine. “The project started nearly 3 years ago in a collaboration with international and Palestinian friends. We engage in rehabilitating and greening lands and permaculture,” Ala explains. So far the initiative has successfully implemented six projects throughout the West Bank.

As most attention in Palestine is given to immediate political issues directly related to Israel’s occupation, Ala’s ReSign project and the GREِEN Palestine initiative show a popular resistance concerning wider societal issues. And as Ala states regarding his project: “Everything here is connected to the political situation. Still, it is not the core of the idea I’m working on.”