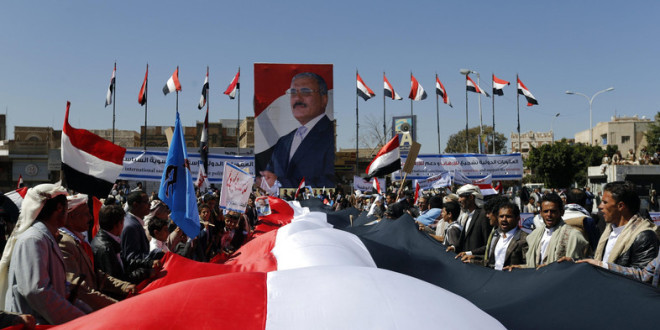 Thousands of supporters of former Yemeni President Ali Abdullah Saleh and Shi’ite rebels on Friday took to the streets to protests the threatened UN sanctions against insurgent chiefs and Saleh. The ex-strongman, who stepped down in 2012 due to Arab Spring-inspired protests, is considered as the chief backer of the Huthi rebels that have seized capital city Sana’a, among other cities, in September.

Protesters, many of whom were equipped with machineguns, gathered in the iconic Tahrir Square in Sana’a, and chanted slogans hailing Saleh and condemning the US for proposing the sanctions.

“The people want Ali Abdullah Saleh”, the chanted, warning current President Abdrabuh Mansur Hadi, “We shall not listen to America!”

Demonstrators were seen carrying portraits of Saleh and pictures of rebel commander Abdulmalik al-Huthi, the younger brother of the rebel chief and one of the commanders that had overseen the storming of Sana’a.

The General People’s Congress (GPC) party, of which Saleh is a member of, had called for the protests, warning that sanctions would only intensify the political crisis in Yemen, which has for years been unstable.

The GPC has accused the US embassy of threatening Saleh to leave the country by Friday or face UN sanctions, a claim which Washington has denied.

Saleh was Yemen’s first President after the 1990 unification, but quit his post under the regional peace plan. Huthi rebels had fought against Saleh when he was in power, but the two now seem to be allies.

The fifteen-member Security Council has until Friday evening to stop the proposal from going to the sanctions committee for approval.