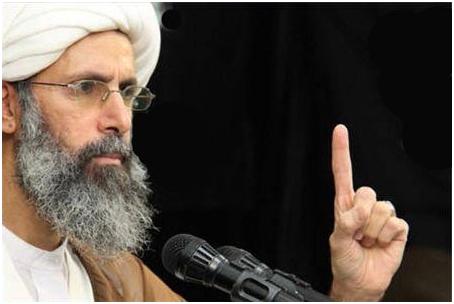 Prominent Saudi Shiite cleric and anti-government protester Nimr al-Nimr was condemned to death by a Saudi court on Wednesday on charges of sedition. He has been on trial since March 2013.

According to his family, Nimr, who was one of the leaders in the protests against Sunni authorities in 2011 and Shiite protests in neighbor Bahrain, was convicted of seeking “foreign meddling” in the kingdom. The cleric’s brother Mohammed al-Nimr posted on Twitter that the cleric was found guilty of “disobeying” Saudi Arabia’s rulers and taking up arms against the kingdom’s security forces.

His family has accused the court of ignoring his “peaceful and non violent approach”, and said that the case caused “social and political discontent”.

“The ruling… is political par excellence”, his relatives in eastern provinces of Qatif and Awamiya said in a statement. They also called for dialogue with the authorities “out of concern for our dear country”.

Most of the two million Shiites in Saudi Arabia live in the eastern part of the kingdom, where the vast majority of its oil reserves lie. Many in the region complain of marginalization, and began voicing them in February 2011 after violence broke out between religious police and Shiite pilgrims in the holy city of Medina.
Protests escalated after the kingdom intervened in Bahrain to support the Sunni monarchy against the Shiite uprising.

Tensions ramped up in July 2012 after security forces injured and arrested Nimr.

Twenty-four people, including four policemen, have died in the clashes so far.

In June, a court had sentenced two to death for “taking part in forming a terrorist group” and other crimes connected to the protests; several others also received long prison sentences.

In November 2011, when four Shiites were killed in Eastern Province, Nimr demanded the “release of all those detained in the protests, and all prisoners of conscience – Sunnis and Shiites”. At a funeral of one of those killed, Nimr said, “We are determined to demand our legitimate rights by peaceful means”.