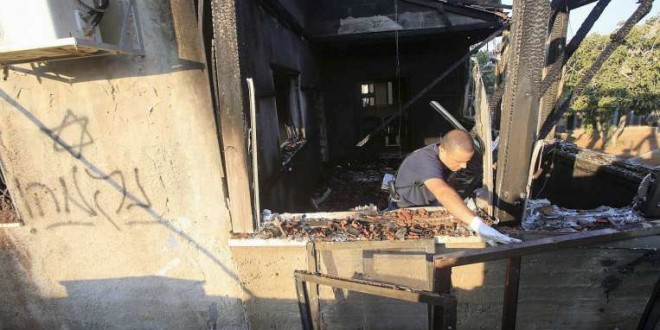 An Israeli police officer inspects a house damaged by Jewish extremists in Doma, near the West Bank city of Nablus on July 31, 2015. PHOTO: REUTERS

On Friday a Palestinian children has burned to death after Israeli settlers set fire to houses in West Bank.

Two homes were set ablaze in an arson attack by Israeli settlers in Duma Palestinian village in south of Nablus. The fire broke out after Jewish settler threw firebombs and Molotov cocktails into houses.

Local residents’ identified the killed infant in the attack as  the 18 months old Ali Saad Dawabsha.   Palestinian medical sources said the child’s parents, Reham, Saad, and brother, Ahmad, a four years old kid, were all injured and rushed to a hospital in Nablus.

Witnesses said, the parents woke up and tried to remove their children from the house, but were unable to save him. The other house was empty at the time.

The attackers also draw a Hebrew graffiti near the arson scene, saying “revenge”  along side with a Star of David on the walls of the homes.

After the incident, the Palestinian Liberation Organization (PLO) condemned the “brutal assassination” of the toddler stressing that the regime in Tel Aviv bears “full responsibility” for the arson attack in a statement by PLO official Saeb Erekat.

In another statement, the Israel Defense Forces (IDF) said that The preliminary investigation suggests that suspects entered the village in the early hours of the morning, set the homes ablaze and sprayed graffiti in Hebrew on the homes.

Israeli settlers have in recent years carried out various attacks which involved arson and graffiti on Palestinian property in the West Bank and Jerusalem under the “price tag” slogan.

attack Duma Palestinian fire West Bank 2015-07-31
sherehan
السابق Kuwait Advised it Citizens not to Travel to Lebanon
التالي Darker Horizons Ahead: Rethinking the War on ‘IS’