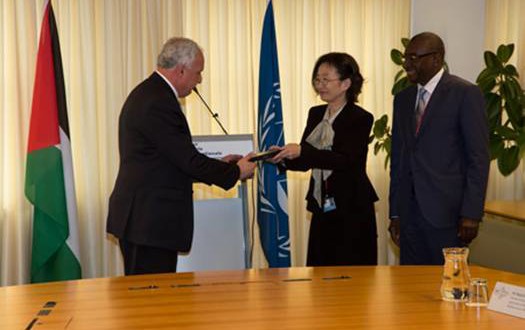 ICC Second Vice-President Judge Kuniko Ozaki, in the presence of the President of the Assembly of States Parties, H.E. Sidiki Kaba, presents Dr. Riad Al-Malki, the a special edition of the Rome Statute (photo from ICC website)

On Wednesday, Palestine officially becomes the 123rd member of the International Criminal Court (ICC) after joining Rome Statute the ICC’s founding treaty. In a closed ceremony at the court’s headquarters in the Hague, Netherlands. Palestinian Foreign Minister Riad alMalki received a ceremonial copy of the court’s statute and then he said “As Palestine formally becomes a State Party to the Rome Statute today, the world is also a step closer to ending a long era of impunity and injustice. Indeed, today brings us closer to our shared goals of justice and peace.”

90 days ago, Palestinian President Mahmoud Abbas asked to join the ICC and signed Rome statute after the UN Security Council voted down a resolution that setting a 3 years deadline for the establishment of a Palestinian state on the lands occupied by Israel.

Joining the ICC allows the court to start investigating Israel’s war crimes in Gaza. And to look at the construction of settlements in the West Bank. Furthermore, it allows investigating Palestinians themselves over rocket attacks by Hamas.

The Palestinians sent documents to authorize the investigations by prosecutor on the crimes committed by Israel in the Palestinian territories starting from June 2014, especially the attacks during summer on Gaza territory that left 2,200 Palestinians dead. So far, no formal investigation has been launched on these attacks.

Both Israel and the United state (not members at the ICC ) were against Mahmoud Abbas decision to sign the Rome statute. But the Palestinians confirmed many times that they had no other options after the negotiations between both parts broke down last year and after Benjamin Netanyahu re elected as a prime minister.

To watch the joining ceremony: