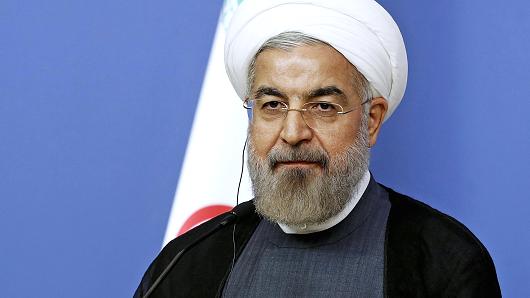 On Thursday, Iranian President Hassan Rouhani criticized Western powers on their blunders in the Middle East, but signaled Iran’s commitment in securing an agreement on its nuclear program.

Speaking at the UN headquarters only days after the US widened its aerial campaign against Islamic State (IS) extremists from Iraq to Syria, Rouhani said that regional moderate forces with international backing would be the best solution to the current extremist crisis in the Middle East.

“The strategic blunders of the West in the Middle East, Central Asia and the Caucasus have turned these parts of the world into a haven for terrorists and extremists. Improper interference in the developments in Syria are clear examples of this erroneous strategic approach in the Middle East”, he said at the UN General Assembly in New York.
He also called on “moderate politicians” in the Middle East to fight against the “violence and terrorism” and said that it was a “myth” that Iran wants to control Arab nations in the region.

“The right solution to this quandary  comes from within the region… with international support and not from outside”, he said, adding that otherwise there would be “repercussions for the whole world”.

He also said that Iran wants to reach a final agreement over its nuclear program before its November deadline and pacify all international concerns.

“We are determined to continue negotiations with our interlocutors in earnest and good faith, based on mutual respect and confidence”, he said.

Rouhani added that such a deal would be a “historic opportunity” for global powers to send a message of “peace and security”.

He also told the UN that the “oppressive sanctions” imposed on Iran was a “strategic mistake”, and that a delay in reaching a deal will only raise economic costs.

“A final accord regarding Iran’s peaceful nuclear program can serve as the beginning of multilateral collaboration aimed at promoting security, peace and development”, he said.