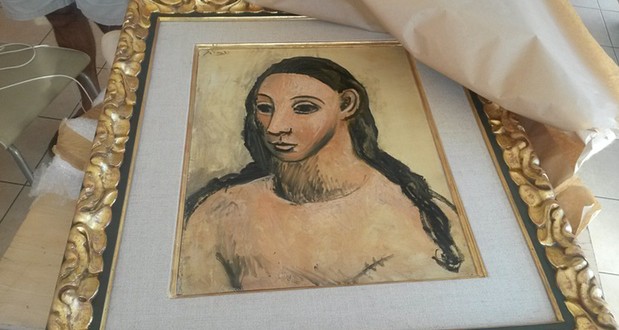 French customs officials have seized a  Pablo Picasso painting “Head of a Young Woman,” which  worth  about  25 million Euros ($27.4 million)  from a boat in the Corsican port of Calvi in France .

There were concerns that it might be permanently removed from Spain in defiance of an export ban.

Officers boarded the vessel after French authorities in Corsica received a request  for authorization to export the painting to Switzerland, according to a spokesman.

The 1906 “Head of a Young Woman,” owned by Jaime Botin, has been impounded pending an expected request for its return to Spain.

Jaime Botin, is a well-known Spanish banker whose family was involved in the Santander banking group in 1857. A customs authority spokesman said: “The 79-year-old man, who was formerly the banking giant’s vice chairman, was not aboard the vessel, which was owned by the company and flying a British flag”

It was not known how the painting turned up in Calvi.

In May, Spain’s High Court blocked a bid by Botin to export the Picasso to London following an application by auctioneer Christie’s.  In its ruling, the court declared the painting a Spanish national treasure.