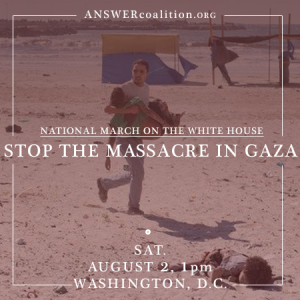 Several Muslim, Arab-American and anti-war groups have joined forces to organize a march on the White House that will take place at 1:00 p.m. local time on Saturday, August 2nd to protest against the Israeli operation in Gaza.

This is not the first show of solidarity for Gaza in the Unites States. Demonstrations by several thousands have been taking place in the cities of Chicago, Los Angeles, San Francisco and Washington, DC.

Brian Becker, National Coordinator of the ANSWER Coalition, said “We have been in the streets every day in cities around the country.What is needed now is a massive National March on Washington.Israel receives $4 billion in ‘aid’ from the United States each year. This money is being used to commit war crimes against the Palestinian people in Gaza. We are demanding that all U.S aid to Israel be ended now”.

The coalition says that it will demand an end to the “massacre” in Gaza, the Israeli blockade of Gaza, US aid to Israel and the occupation of Palestinian territory. They welcome participants and have arranged for transportation to the White House from across the nation.

For more details on protests and marches in solidarity with Gaza check our events page here.