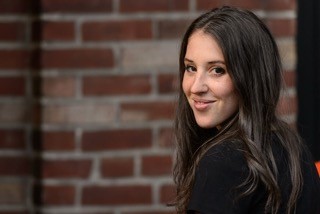 While some may try to find an unworn path to follow, Caro Loutfi has taken it upon herself to boldly carve her own way. As the Executive Director and resident change-maker at Apathy is Boring, Loutfi is staring youth voters straight in the eye and calling for a change.

Voter apathy amongst Canadian youth is a national epidemic that Loutfi and her co-conspirators are tackling head-on with refreshing audacity and a big-picture vision. Apathy is Boring (aka A is B) is a non-partisan organization that is addressing youth-disengagement through a variety of arts- and technology-based strategies – a much needed antidote to a democracy debilitated by its increasingly low voter turnout.

The organization’s youth-led, creative approach is what first pulled Loutfi in. Starting off as a Communications Intern in the summer of 2013, she moved on to Youth-Friendly Coordinator, then Director of Operations. As of April 2015, Caro Loutfi now holds the position of Executive Director with no plans of slowing down.

Born in Montreal to a Lebanese father and a Japan-raised Anglo-Canadian mother, with a stint in Ethiopia as a child, Caro grew up immersed in a rich, bilingual tapestry of cultures. As such, Caro is a bit of a poster child for Canadian multiculturalism – though this reductive title would not do her justice.

Caro shows nuance when she discusses identity, of which she says: “In my perspective, most Canadians are immigrants, except for Canada’s Indigenous peoples. I consider myself Canadian, and it’s in this diversity of identities that I feel most at home.”

After majoring in Art History and minoring in Human Rights at Concordia University, Caro continued to seek new ways to fulfill her double-passion for the arts and social change. The merging of these two powerful forces manifested in her past roles as Co-Producer for Montreal’s Art Matters Festival, and when leading a fundraising arts initiative for Namaste Children’s House in Nepal.

It was after her work in Nepal that Loutfi decided she wanted to re-focus her energies on issues closer to home. Loutfi’s reasoning is insightful: “There is a lot to do across the street, before heading across the world. I also value thinking about social change through the lens of empowerment instead of as charity.”

In fact, A is B played an integral role in breaking down her own preconceived notions about youth disengagement. By shifting the conversation from ‘Why don’t youth care?’ to ‘What barriers stand in the way of youth engagement?’ Loutfi discovered a serious shift in the types of conversations she could have with her peers.

A is B has a crystal clear vision: empowering youth to co-create a nation that reflects their values. Loutfi emphasizes that need for a long-haul approach, as opposed to one-off campaigns common in this age of instant activism. While changing the tide may take a while, the payoff is ultimately too important to ignore: a sustainable democracy.

“Canadian youth hold power in numbers: there are 5.5 million millennials eligible to vote in this October’s federal election. I would ask all youth to stand among their peers and have their voices heard. Voting is one of the ways we can be heard in society, and we want to use every means possible to have our values represented.”