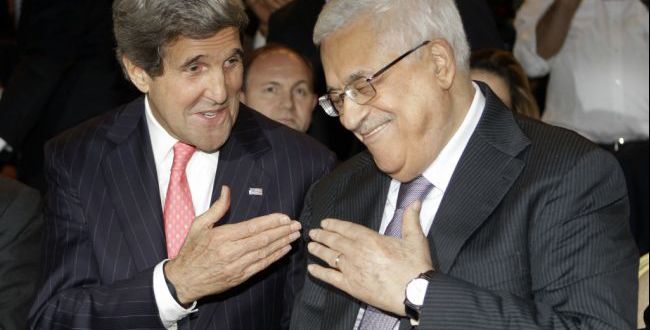 Abbas, Kerry to talk about Jerusalem in Amman

Palestinian President Mahmoud Abbas will meet with US Secretary of State John Kerry on Thursday to discuss the increase in violence in East Jerusalem. The meeting will occur in Jordanian capital Amman at 11:00 GMT, Abbas’ spokesman Nabil Abu Rudeina said.

Kerry is set to arrive in Jordan on Wednesday to speak with King Abdullah II on tensions boiling over in east Jerusalem, among other regional issues. His arrival comes as unrest continues to grip east Jerusalem for the past few months, and has disseminated to other parts of West Bank and Arab towns in Israel, inciting fears of a new Palestinian resistance.

Most of the tension has been concentrated near the Al-Aqsa mosque in Jerusalem, a site holy to both Jews and Muslims – several clashes between Israeli police and Palestinians have been sparked by fears of Israel looking to legislate changes so that Jewish people can pray inside the Al-Aqsa compound.

“The Palestinian position will be made crystal clear: the Israeli violations are a red line and cannot be tolerated – especially with the tension and Israeli escalation in Al-Aqsa and Jerusalem”, Abu Rudeina said.

Clashes at the compound have drawn sharp criticism from Jordan and Palestine; Jordan has custodial rights at the compound and other religious sites in the region. Israel has repeatedly stated that it does not have any plants to change the status quo.

Abbas will also speak with Kerry about the Palestinian plans to present its draft resolution to the UN Security Council later this month, looking to set an end date for the Israeli occupation, Abu Rudeina said.

“President Abbas will also affirm… that the Palestinian side is going to the Security Council this month to call for an end date for Israeli occupation because the situation has become explosive and it cannot wait”, he said.