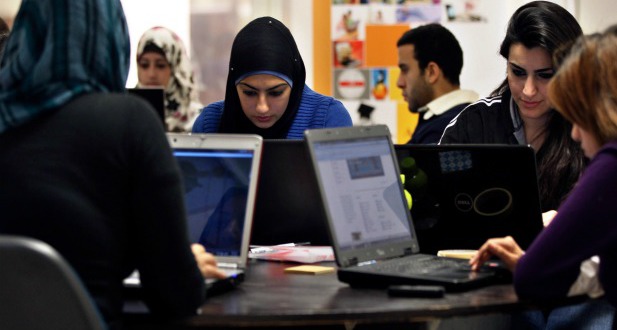 Egyptian Internet startup ElWafeyat.com is part of a looming pan-Arab tech renaissance with incubators and start-up funders spanning from Abu Dhabi to Cairo.

Cairo-based ElWafeyat.com, which roughly translates to “deaths” in Arabic, is an online alternative to traditional paid newspaper obituaries, is creating a social-network-type website with pictures, posts and pages for friends and family to memorialize their deceased loved ones. In November, it received $100,000 by way of seed funding from US-based 500 Startups and in now a part of the accelerator’s four-month program in the US at Mountain View, California. Nesma El-Far, one of ElWafeyat’s three 24-year-old co-founders, says that they “aim to go global.”
Most entrepreneurs in the region are customizing ideas created in the West for the Arab market, but a few are coming up with unique tech start-ups to expand beyond the Middle East, grabbing the attention of US investors.

“People look at these markets like they are emerging. They have already emerged”, Dave McClure, the founder of 500 Startups, said – he has already invested $1.5 million in fifteen start-ups from the Arab World.

A few early-stage start-ups, mostly from the e-commerce sector, have raised over $200 million in the past 3 years, including investments from J.P. Morgan, Summit Partners, Blakeney Management and Tiger Global Management.

Instabeat, a start-up from Beirut, recently began shipping wearable tech-gear for swimmers; it raised $2 million from a combination of crowd-funding on Indiegogo Inc., venture capital and local angel investors, and plans to start selling in retail stores in the US before Christmas.

Hala Fadel, chair of the Massachusetts Institute of Technology Pan-Arab Enterprise Forum, says that there was very little US interest in Arab start-ups, but “That’s now slowly changing”.

Start-up accelerator Flat6Labs in Cairo has helped over 150 entrepreneurs; it’s expanding across the Middle East, and now has new offices in Jeddah in Saudi Arabia and Abu Dhabi in the UAE. By April, Google, with startup incubator Astrolabs, will set up a tech hub for local entrepreneurs in Dubai.