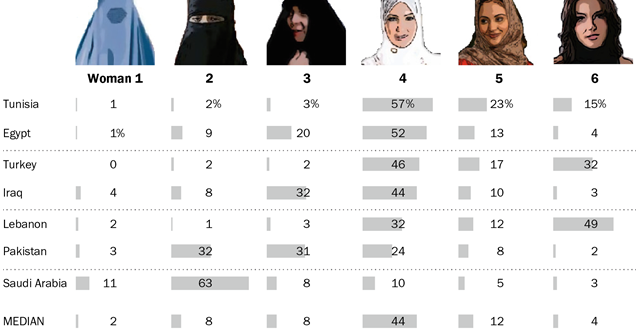 The University of Michigan’s Institute for Social Research recently conducted a survey in seven Muslim-majority nations, Tunisia, Egypt, Lebanon, Iraq, Saudi Arabia, Turkey and Saudi Arabia, found out that people prefer that women cover their hair, but not necessarily their face. Additionally, more than 25% of the people in Lebanon and Turkey feel that it is appropriate for women to not cover their head at all when out in public.

In the survey, people were questioned on visual preference, with each respondent given a card depicting six different styles of a woman’s headdress and being asked to choose the style they found most appropriate for a public place. No labels were written on the cards, but the styles ranged from a niqab, a fully-hooded burqa, a less-conservative hijab and an option with a woman not wearing any head covering.

Most respondents agreed that option #4, a woman whose ears and hair were covered completely with a white hijab, is most appropriate for a public place – 57% in Tunisia, 46% in Turkey, 44% in Iraq and 52% agreed with option #4. In Egypt and Iraq, option #3, a woman with ears and hair covered with a more-conservative black hijab, was the second most popular choice.

Mansoor Moaddel, Professor of Sociology at the University of Maryland and a Research Affiliate at the University of Michigan’s Population Studies Center and Lead Researcher in the survey, said, “The question on the style of dress was part of a section of questions that asked people about their attitudes toward the social status of women in the family, politics, job market and education.”

“Gender issues have been the integral component of the cultural debates among intellectuals and political activists in the Muslim world since the 19th century.The rise of the modern secular state in places like Egypt, Iran and Turkey in the 1920s provided a favorable context for women to engage in movements for their rights. In Egypt, for example, following the 1922 declaration of independence, female activist Huda Shaarawi founded the Egyptian Feminist Union and discarded her face veil, and many upper-class women followed her example. Beginning in the late 1920s, women slowly forced their way into the Egyptian University. In Iran and Turkey, forcing women to unveil later became the state’s official policy.”

When asked on how the team determined the images, he said, “These pictures are based on variations in different types of dress that we know exist in Muslim-majority countries. The pictures show variation from very conservative to liberal style. The difference between No. 3 and No. 4 is that No. 4 is wearing a headscarf. No. 3 is wearing a chador. She always must use one hand to hold it in place; it is draped over her head. With woman No. 4, her hands are free, she has mobility and she can work. For those in Muslim countries, they would instantly recognize the differences.”