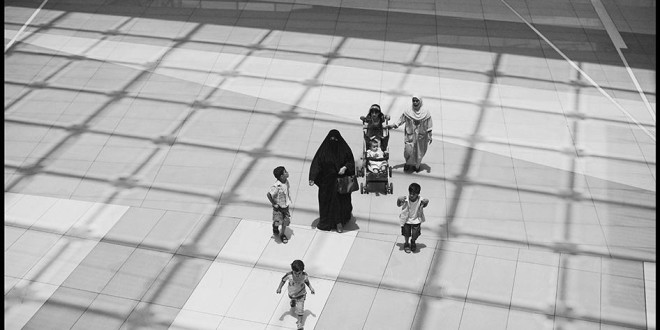 A female employer and her children are accompanied by their domestic worker, back right, as they walk through The Avenues, an indoor luxury shopping center in Kuwait City. © 2010 Moises Saman/Magnum Photos

Kuwaiti legislators’ adoption on June 24, 2015, of a new law giving domestic workers enforceable labor rights is a major breakthrough that should lead other Gulf states to take similar action. Kuwaiti authorities should rigorously carry out the new law and address remaining legal and policy gaps that discriminate against domestic workers and put them at risk.

The law passed by Kuwait’s National Assembly is the country’s first regulating the labor rights of domestic workers. The country has an estimate of more than 660,000 such workers, most of them women from Asia and Africa. The Kuwait newspaper, Al-Jarida, published the text of the new law, which grants domestic workers the right to a weekly day off, 30 days of annual paid leave, a 12-hour working day with rest, and an end-of-service benefit of one month a year at the end of the contract, among other rights.

“Kuwait’s parliament has taken a major step forward by providing domestic workers with enforceable labor rights for the first time,” said Rothna Begum, Middle East women’s rights researcher at Human Rights Watch. “Now those rights need to be made a reality in Kuwait, and other Gulf states should follow Kuwait’s lead and protect the rights of their own domestic workers.”

Migrant domestic workers in Kuwait constitute nearly a third of the country’s entire workforce yet are excluded from the main labor law that protects other workers’ rights. A 2010 Human Rights Watch report documented many abuses against domestic workers, including non-payment of wages, long working hours with no rest days, physical and sexual assault, and no clear channels for redress.

The new law will come into force once Kuwait’s Emir has formally approved it and the final text is published in the Official Gazette. The Interior Ministry is required to issue regulations to implement the law within six months of its publication.

The new law, as published in Al-Jarida, is significant because it gives domestic workers enforceable labor rights for the first time, but it lacks key protections found in the general labor law. The labor law – Law no.6 of 2010 on Labor in the Private Sector – provides for a 48-hour work week, or 8 hours a day, and an hour of rest after every 5 hours of work. But the domestic workers law provides for a maximum 12-hour working day with unspecified “hours of rest” and one day off a week. The labor law also has detailed provisions for sick leave, under article 69, including 15 days at full pay, whereas the domestic worker law simply requires employers to provide medical treatment.

The domestic worker law also falls short by failing to set out enforcement mechanisms, such as labor inspections. It prohibits employers from confiscating workers’ passports, a common abuse, but fails to specify penalties. The new law does not guarantee the right to form a union. Kuwaiti authorities should address these gaps in the implementing regulations, Human Rights Watch said.

Despite the new law, Kuwait retains other policies that put domestic workers at risk of exploitation and abuse. For example, under the kafala – visa-sponsorship – system, migrant domestic workers cannot transfer to another employer until their original contract ends without their current employer’s consent. This policy traps many domestic workers in abusive situations. Under this system, domestic workers who leave their jobs before the end of their contract without their sponsor’s consent are considered to have “absconded,” a crime under Kuwaiti law. They can be arbitrarily detained, fined, or sentenced to imprisonment. For workers escaping abusive employers, such a charge ends up punishing the victim, Human Rights Watch said.

“The new legislation is a start, but domestic workers remain at high risk in Kuwait,” Begum said. “Kuwait should continue improving protections for domestic workers by ending policies that can trap them with abusive employers or punish them for escaping.”

To ensure that the new law is effective, Kuwaiti authorities should raise awareness about it among domestic workers and employers, Human Rights Watch said. They should sanction employers who violate the law and ensure that court reviews of complaints are efficient.

Kuwait has gone further than its Gulf neighbors in providing for domestic workers’ rights under law. Qatar, the United Arab Emirates, and Oman exclude domestic workers from their labor laws.

Bahrain’s 2012 labor law affords domestic workers annual vacations as well as access to mediation in labor disputes – but it fails to provide other basic protections, such as weekly rest days, a minimum wage, and limits on working hours.

Saudi Arabia adopted a regulation in 2013 that grants domestic workers nine hours of rest in every twenty-four, with one day off a week, and one month of paid vacation after two years. But domestic workers can be required to work up to 15 hours a day, whereas Saudi labor law limits other workers to 8 hours of work daily.

Kuwait and other Gulf countries should ratify the ILO Convention on Decent Work for Domestic Workers, Human Rights Watch said. This treaty establishes global standards on domestic workers rights, and states that protections for domestic workers should be the same as for other workers.

“Kuwait has set an important precedent for its Gulf neighbors by accepting that domestic workers’ rights should be protected in law,” Begum said. “Other Gulf countries should follow suit.”