أخبار عاجلة
الرئيسية » الشرق الأوسط » Iraq: 11, including two children, killed as the Iraqi military prepares for an assault on Fallujah 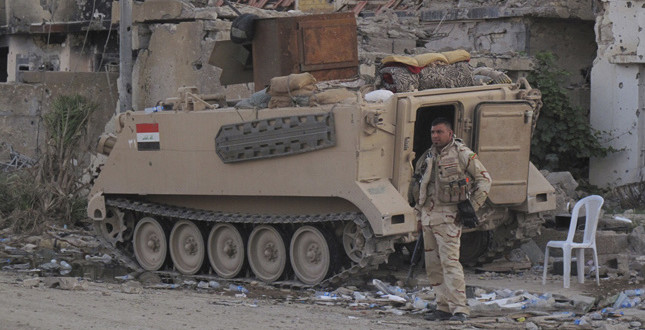 Iraq: 11, including two children, killed as the Iraqi military prepares for an assault on Fallujah

Eleven people were killed in violence as the Iraqi Armed Forces on Friday launched an operation to regain control of areas in the proximity of the militant-held city Fallujah. Anti-government forces have been in control of the city, not far from Baghdad, and parts of the provincial capital Ramadi, since January. The operation is being considered as preparation for a full-scale assault on the city itself.

“A military operation was launched… to eliminate the ISIL organization and liberate Fallujah. The operation will continue until an assault on Fallujah”, a senior army officer said. But most analysts say that the assault on Fallujah is not likely to happen any time in the near future, as the military has throughout the year struggled to retake militant-held territory in the province of Anbar. Analysts say that the military would face extensive challenges in an assault on Fallujah, which would also involve a high probability of civilian casualties and large-scale damage to city property.

The desert province Anbar shares an international border with Syria. The crisis in Anbar erupted in December when the main Sunni Arab anti-government protest outside Ramadi was dismantled by government forces. Militants recently took over Fallujah and parts of Ramadi, becoming the first anti-government force to do so in a major Iraqi city since the US invasion in 2003.

The violence comes during the count for the general election held on April 30th. Officials have been quick to lay the blame on external factors for the bloodshed, while diplomats and analysts say widespread anger in the Sunni Arab community is also an important factor.