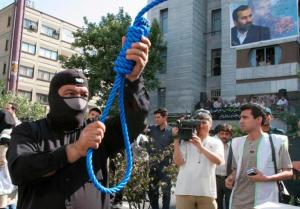 A former psychologist was executed in Iran of heresy after spending eight years in prison, a human rights group said on Tuesday. The execution is the most recent example of what activists feel is a troubling rise in the use of the death penalty in Iran.

The Human Rights Activists News Agency (HRANA) said that Mohsen Amir Aslani was hanged to death in a prison near the city Karaj on September 24th for “corruption on earth and heresy in religion”.

According to Iranian opposition news sites, the 37-year-old had given religious classes in which he taught a new interpretation of the Quran. He was also accused of insulting Prophet Jonah – the Iran Wire reported that he told one of his classes that Jonah couldn’t have emerged from a whale’s belly, and the statement led to the charges against him.

UN chief Ban Ki-moon has recently expressed fears over the reported increase in death sentences in the Islamic Republic; according to rights group Amnesty International, Iran is only second to China in the use of the death penalty as punishment. Human rights activists fear that hardliners who oppose moderate President Hassan Rouhani and his diplomacy with the West regarding Iran’s nuclear program are pushing the increase in executions to weaken Rouhani.

According to official figures, Iran had executed 373 people in 2013. However, Cornell University’s Deathpenaltyworldwide.org database reports that around 624 to 727 last year, up from the 314 to 580 executed in 2012. The Iran Human Rights Documentation Centre says that 531 people were executed in Iran in 531.

Last Thursday, eighteen Nobel laureates wrote an open letter to Ali Khamenei, Iran’s Supreme Leader, and called for the “immediate and unconditional” release of Iranian physicist Omid Kokabee. Kokabee was arrested on a visit to Iran in 2011 and was charged with “communicating with a hostile government” and receiving “illegitimate funds”; he was studying in the US at the time.