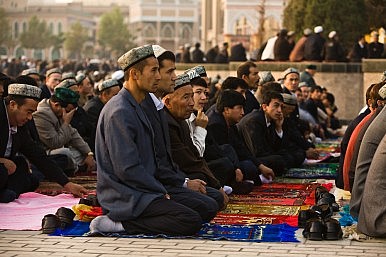 China: Religious prayer to be banned in all government building in Xinjiang

The tense autonomous region of Xinjiang has banned prayers and other religious practices in government business offices, schools and other buildings. Religious activities will only be allowed to take place in registered locations like mosques. Under new rules, people will also be not allowed to wear or force others to wear logos or clothes associated with extremist groups. It remains unclear on the kind of logos and clothes being targeted.

The region has also imposed a heavy fine on people using the Internet and mobile phones to disseminate messages which “undermine national unity”.

The government’s orders are bound to have an effect on Muslims, most of whom usually perform two of the day’s five prayers during workdays in quite parts of office buildings. Many Muslims also use computers and mobile phones to study and practice religious hymns, embedded in alarm clocks and other software.

“An increasing number of problems involving religious affairs have emerged in Xinjiang” Ma Mingcheng, deputy director of the Xinjiang People’s Congress and director of its legislative affairs committee, said.

Chinese officials have stated that there has been a sharp rise in fundamentalism in Xinjiang, a region which borders Pakistan and is a hub of violence run by separatist movement East Turkestan Islamic Movement.

The new rules will come to effect on January 1st, and also ban people from viewing and digital distribution of extremist content outside or in religious venues, demanding religious leaders to report all such activities to the police.

The local parliament recently passed a law stipulating a penalty ranging between 3,000 to 5,000 Yuan’s for people who use mobile phones, the Internet or digital publishing to undermine social stability, national unity or incite ethnic violence.

The last case of major violence in region occurred in the Yarkant County near the Pakistani border, when four people were killed in knife attacks and 11 “mobsters” were killed by security forces.