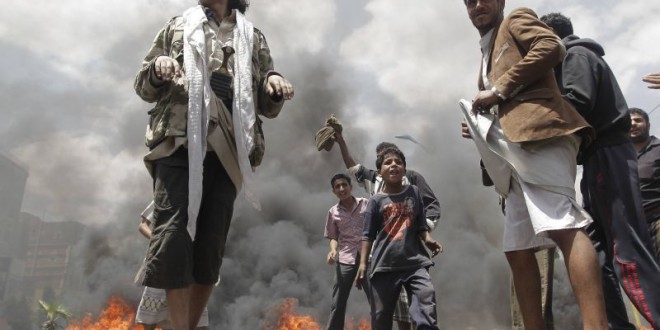 On Wednesday, Yemeni warplanes struck tribesmen suspected of damaging power lines on Tuesday, an act that left the country without any electricity and caused angry protests in the capital city of Sana’a. Officials had also accused the tribesmen of blocking the road that connects Sana’a to the province of Marib to the east, thus making it almost impossible to carry out any repairs.

The air strike on Wednesday targeted a collection of tribesmen close to Marib, sources said. No immediate death tally has been announced. According to sources, the saboteurs cut the power lines in protest against the governor of Marib, Yemen Arif al-Zoka, whom they accuse of pocketing government subsidy meant for the tribes.

Since Tuesday, tribal Yemen suffered a blackout, with both the energy grid and the power grid, including Marib’s gas plant, completely down, the energy and electricity ministry said. Attacks on power lines in the country are fairly common and are often launched by tribesmen as a means to press for release of any imprisoned relatives or as support for any other demands. The absence of a reliable supply of electricity only further complicates the lives of residents, who already suffer from food and water shortages.

On Wednesday, thousands of people took to the streets and protested against the government, enraged by the power cuts and several weeks of a severe fuel shortage, leaving motorists queued for hours at petrol stations in the city. Protesters, demanding the ouster of the government, then marched towardsSittin Street, where the residence of President Abdrabuh Mansur Hadi is located. Police forces fired warning shots on protesters, some of whom were armed and set tire ablaze.

To calm the protesters, Interior Minister Abdo al-Tarib also took the streets and told them, “We are all going through difficulties”. The Arab Spring-inspired uprising in Yemen lasted for 11 months and led to the ouster of former president Ali Abdullah Saleh. Following his resignation, a consensus government consisting of his loyalists and opponents was formed in Sana’a.