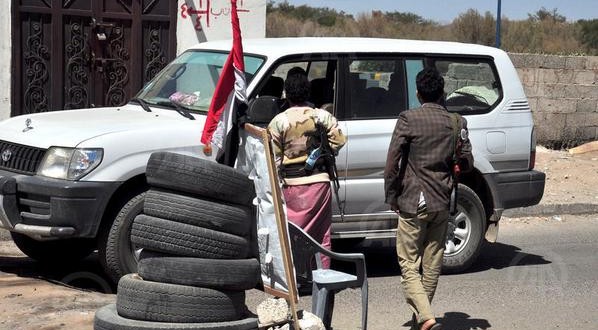 According to sources, the militants arrived in cars to premises broke in many offices, including the office of Mohamed al-Sherafi, the Undersecretary for Financial Affairs.

The incident came on the heels of the Yemeni government failing to meet the deadline on the formation of a new cabinet. According to sources, southern secessionists and Houthi loyalists will each get six seats, while former president Ali Abdullah Saleh’s General People’s Congress will get nine seats. The Joint Meeting Parties (JMP), an opposition coalition that includes Muslim Brotherhood affiliate Islah Party, will get nine seats.

The Houthis and the General People’s Congress had apparently refused President Abd Rabbuh Mansour Hadi to appoint important ministries; in the National Dialogue Conference earlier in the year, Hadi was reportedly granted the power to appoint the ministers he desired.

Anti-Houthi protests in the streets of Sana’a on Tuesday demanded that the Houthis evacuate the city.

Houthis had seized control of Sana’a on September 21st, and later signed a peace agreement with Hadi that promised more economic concessions if the withdraw from the capital and a new cabinet is formed.

However, the Houthis have continued their advance despite the agreement, while also expanding in south-western and central Yemen – they took over the port city Hodayda, and now reportedly control parts of Hajja, a border governorate with Saudi Arabia.

Fighting was also reported in the governorate of Rada’a, were Houthi rebels had arrived from the province of Dhamar.

Houthi rebels on Wednesday killed Ansar al-Sharia commander Anas al-Salami, known for being connect to al-Qaeda and for his support for extremist group Islamic State (IS) after the Ansar al-Sharia attacked a Houthi checkpoint in Bayda. Additionally, Houthi rebels have also reportedly arrested senior al-Qaeda in the Arab Peninsula (AQAP) leader Qassim al-Raymi, who has been wanted by USA and Saudi Arabia for a long time.