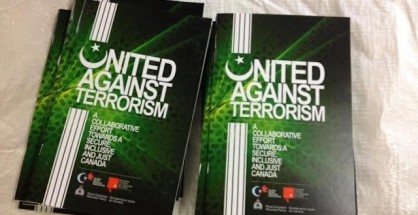 Winnipeg’s Islamic Social Services Association (ISSA) on Monday issued a new handbook to help prevent Canadian Muslim youth from being influenced by extremist groups and become foreign fighters in the Middle East. The book was unveiled by the ISSA in conjunction with several Muslim organizations and with input from the Royal Canadian Mounted Police (RCMP).

According to ISSA President Shahina Siddiqui, the book is the first step in what will eventually be a multi-pronged national strategy to prevent young people from joining militant groups.

The booklet consists of five sections, and has a chapter devoted to counter extremist and violent propaganda through the Quran and the teachings of the Prophet Mohammed. The booklet also has advice for parents on spotting red flags which might suggest that their child is following extremist teachings.

The book was born out of a town hall meeting at the Grand Mosque in Winnipeg in June 2013, with the idea being to share ideas and identify gaps in information flow so that they could come up with a plan “and reverse this trend whereby Canadian youth are getting recruited by these criminal gangs, by these terrorist groups overseas”.

In the past few years, more and more young Canadians have been radicalized and been fighting alongside terror groups in in the Middle East. Last month, the Canadian government said that over 130 people “with Canadian connections” were suspected of engaging in extremist activity overseas.

Siddiqui also said that she has counseled several families who have come to her doorstep, concerned that their child might have fallen under the influence of the extremists.

“To have them plucked literally from their families to be brought overseas to commit acts of violence is never what any parent wants, or any community wants”, Siddiqui said.