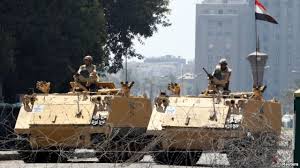 One wonders how much further the United States will allow itself to be dragged down into the deepening abyss that is today’s Egypt. Those in the Obama administration and Congress who favor continued U.S. military aid to the dictatorship in Cairo insist that although such aid may run counter to American ideals, it does serve American interests. I would argue the contrary, that American interests are being harmed every day that support continues.

Far from aiding the United States in the struggle against terrorism, as the Egyptian military dictatorship and its supporters claim, the military’s brutal crackdown on Egypt’s Islamists is creating a new generation of terrorists. Whatever one thought of the government of Muslim Brotherhood leader Mohamed Morsi, and there was much to criticize, it came to office by fair and legitimate electoral means, just as U.S. policy had demanded, and it was headed toward a second election that it probably would have lost.

Although the Morsi government did use force against demonstrators, that was nothing compared with the military’s killing of thousands and imprisonment of tens of thousands since the military coup last summer. Terrorism since the coup has killed more than 10 times as many people as it did in the year Morsi was in office. And it’s not surprising that terrorism has been on the upswing. The military’s crackdown, in which hundreds may be condemned to death in an hour-long trial, will leave some Islamists believing that their only choice is to kill or be killed. For every jihadist the military may kill in the Sinai Peninsula, it creates many more future jihadists throughout the nation.

Certainly all political avenues have been closed. “One man, one vote, one time” used to be the charge leveled at Islamists. It turns out that was the Egyptian military’s policy, and now the United States’, too. A generation of Egyptian Islamists will turn to other means to seek power. And who will be the target of these future jihadists? Not only the Egyptian military dictatorship but also the superpower that is paying the Egyptian military to repress them.

How is this in America’s interest? If the United States wanted to tame Islamism and make it safe for the modern world, it has not merely squandered that opportunity; it has been complicit in crushing that opportunity and all but ensuring that there will never be another chance.

Nor is it in the United States’ interest to be acting so transparently contrary to its stated principles. While some hypocrisy is unavoidable in international affairs, the level of Orwellian doublespeak has been extraordinary in the past few months. As the military dictatorship of Egypt has rapidly and steadily expanded the scope and violence of its repression of all dissent, persecuting journalists and Egyptian liberals, taking obstreperous comedians off the air — not to mention ruthlessly cracking down on the Muslim Brotherhood and its followers — senior U.S. officials have nevertheless blithely referred to Egypt’s “democratic transition” and have spoken sympathetically of the government’s move toward elections, even though everyone knows that the military’s leaders have no intention of creating a democracy in Egypt. No doubt officials feel compelled to use the strange language about “democratic transition” because Congress has required that the administration certify that Egypt is moving toward democracy in order to continue providing military assistance.

Despite this, Congress has been complicit in supporting military dictatorship in Egypt. Anti-Islamist sentiment runs high in the United States. There is a feeling across much of America that the best policy in Egypt, Syria and elsewhere in the Middle East is simply to let the Muslims kill each other. “Let Allah sort it out ,” as Sarah Palin so pithily put it. There is sympathy for any Arab state attempting to crush the Brotherhood and little concern about the torture, persecution and killing that the government uses to accomplish this objective.

Many members of Congress also believe that by backing the Egyptian military they are helping Israel, which, through the American Israel Public Affairs Committee, has actively lobbied Congress for full restoration of military aid. Even though the Morsi government did not pull out of the Camp David Accords or take actions hostile to Israel, the mere presence of a Muslim Brotherhood government in Egypt frightened the Israeli government.

To Israel, which has never supported democracy anywhere in the Middle East except Israel, the presence of a brutal military dictatorship bent on the extermination of Islamism is not only tolerable but desirable. Perhaps from the standpoint of a besieged state like Israel, this may be understandable. A friendly observer might point out that in the end Israel may get the worst of both worlds: a new Egyptian jihadist movement brought into existence by the military’s crackdown and a military government in Cairo that, playing to public opinion, winds up turning against Israel anyway.

Israel has to be the judge of its own best interests. But so does the United States. In Egypt, U.S. interests and Israel’s perceptions of its own interests sharply diverge. If one believes that any hope for moderation in the Arab world requires finding moderate voices not only among secularists but also among Islamists, America’s current strategy in Egypt is producing the opposite result. If one believes, as President Obama once claimed to, that it is important to seek better understanding between the United States and the Muslim world and to avoid or at least temper any clash of civilizations, then again this policy is producing the opposite result.

And if one believes that just as the days of Hosni Mubarak’s regime were numbered, and so the idea of a Mubarak 2.0 can never achieve stability in Egypt, no matter how ruthless its brand of authoritarianism, then our current policy is only drawing us closer to the day when a new revolution will rock Egypt. The next revolution will almost certainly be both more radical and more virulently anti-American than the last.

Robert Kagan is a senior fellow with the Project on International Order and Strategy in the Foreign Policy program at Brookings Institute. His most recent book is the New York Times bestseller, The World America Made.