أخبار عاجلة
الرئيسية » أخبار عاجلة » Why Palestinians Fight Back: The Logic of Life and Death in Gaza 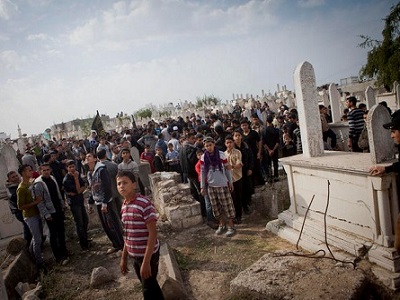 Why Palestinians Fight Back: The Logic of Life and Death in Gaza

Another row is brewing between Israel and the Palestinian Resistance Movement, Hamas, over the release of Avraham Mengitsu, an Israeli citizen who, according to Israeli military sources, ‘slipped into Gaza’ on September 7, 2014.

The circumstances of Mengitsu’s entry into Gaza remain unclear, especially since Hamas’ political leader,Khaled Mashaal, denied that the military wing of Hamas is holding the Israeli citizen.

According to Israel’s Defense Ministry, another Israeli is also being held in Gaza. A gag order on Mengitsu’s disappearance was just lifted, but another remains in effect regarding the other, allegedly, detained Israeli.

Indirect negotiations for their release are yet to begin, according to Israeli officials. For Hamas, who, according to Mashaal, has been approached by Israel via European interlocutors, no discussion will be possible until Israel releases 71 Palestinians. This is the number of Palestinians who were re-arrested soon after they were released in 2011 following a prisoner exchange between Hamas and Israel. At the time, a prisoner swap secured the release of 1,027 Palestinians (477 reportedly affiliated with Hamas) and Gilad Shalit, an Israeli soldier who was captured and held by Hamas fighters for five years.

The new prospect of negotiations will allow Hamas to raise the issue of Israel’s violation of the last prisoner exchange agreement. By re-arresting freed prisoners, future agreements with Israel would appear frivolous and seem like a temporary measure to secure Israel’s immediate interests, without full and unconditional commitment regarding the freedom of newly released Palestinian prisoners.

Being the occupying power with unhindered access to occupied Palestinian territories in Jerusalem and the West Bank, Israel can apprehend any Palestinian they accuse of ‘terrorism’, without much proof or serious due process. The Israeli efforts at choking any form of Resistance, armed or otherwise, is often supported by the Palestinian Authority, whose security goons are fully trained and equipped to crush any dissent in the West Bank. A recent foray of arrests, targeting mainly Hamas supporters and other dissenting voices, is the latest proof.

Many cynics questioned the prisoner exchange in 2011. Some asked, “What is the value of securing the release of hundreds of prisoners if they can be re-arrested by Israel at whim?”

Palestinians continue to face the same dilemma of every national liberation movement in modern times. Native Americans, too, haggled with the same dilemma as they faced genocide and annihilation.

A well-intentioned intellectual recently advised me that Palestinians should lay down their arms, dismantle their institutions and allow Israel to take over Gaza, which would, in turn, establish that Israel abides by the rules that govern occupied territories.

But has Israel ever heeded the calls of the Fourth Geneva Convention or any other international lawsconcerned with the rights of an occupied nation? Israel is in violation of more UN General Assembly and Security Council Resolutions than any other nation on earth, and caring about the affairs of occupied civilians has hardly ever been an Israeli priority.

Israel’s war on Gaza a year ago has wrought more devastation than any other war in the past. A recently published UN report, while it indicted Israel, also indicted Palestinians for targeting civilians. Although it was expected that the report would reject random firing of homemade rockets in civilian areas, the narrative, as a whole, put on a par Israel, a powerful aggressor and an occupier, with Palestinians, who are in a perpetual state of self-defense.

Apart from the UN report, coupled with a few other reports, as well as the Palestinian Authority’s bashful attempts to seek International Court of Justice (ICC) involvement to investigate Israeli war crimes, little has changed in Gaza. The suffering abounds, insufficient aid trickles in which merely keeps people alive, little reconstruction has taken place, electricity blackouts are long and frequent, and the siege remains in place, more dire than ever. Moreover, the UN Aid Agency, UNRWA, dedicated to the welfare of the Palestinians, is$101 million in debt, with very little donor cash funding to rescue it.

The fleeting thought that ‘the world won’t not stand idle following Israel’s 51-day war on Gaza’ (so-called ‘Operation Protective Edge’), was just that: a fleeting thought, similar to the wishful thinking that following the so-called ‘Operation Cast Lead’ in 2008-09. The death toll among Palestinians in both wars was nearly 4,000, mostly civilians, a huge proportion of them being children. But the suffering, of course, extends beyond the 4,000 and their bereaved families, as tens of thousands were wounded or maimed, the Strip’s impoverished infrastructure being destroyed and the collective trauma unprecedented.

Israeli justification that its action is propelled by the need to protect civilians in border areas is flimsy at best, since the 69 or 73 Israelis killed during the last war were soldiers, who were killed while on a mission to invade the besieged Strip.

But is it true that, if Palestinians did not resist, Israel would not have employed so much firepower? And, perhaps, would have been kinder in its treatment of Palestinians?

Armed resistance is kept at a minimum in the West Bank and Jerusalem, with much of the Israeli Army stationed there and where illegal, fortified Jewish settlements are in constant expansion. Even stone-throwers or unarmed demonstrators are regularly killed and wounded by the Army and Jewish settlers. And while the Palestinian Authority is playing a crucial part in controlling the population, Israel is amassing wealth from its occupation. Not only is Israel’s occupation of the West Bank the least costly of all illegal occupations in modern times, it is also the most profitable.

Expecting Gaza not to resist is an invitation for Israel to complete its humiliation of the Palestinian people, to utilize the Strip for financial gains (for example, natural gas near the coast and racially segregated beach resorts, etc.), and to turn its men, women and children into cheap labor, trying to eke out a living in order to secure mere survival. Indeed, that was the case for many years, starting in 1967 till Israel’s so-called disengagement in 2005.

The failure of the international community to act following the last round of massacres in Gaza means that Palestinians there are on their own, at least for now. Their Arab brethren are either consumed with their own misfortunes, or are openly conspiring against the tiny, resolute Strip.

So, even if the math of Resistance does not add up – whether in unguaranteed prisoners swaps, or terrifying death tolls – Palestinians in Gaza will continue to resist. Their ‘fiddayeen’ (freedom fighters) have done so, dawning in 1948 with the current generation standing vigilant by the border in 2015.

This is not a matter of strategy, but an act governed by a simple logic that they live by: either a life with dignity or death with honor.

– Dr. Ramzy Baroud has been writing about the Middle East for over 20 years. He is an internationally-syndicated columnist, a media consultant, an author of several books and the founder of PalestineChronicle.com. His latest book is My Father Was a Freedom Fighter: Gaza’s Untold Story (Pluto Press, London). His website is: ramzybaroud.net.
Palestinian Authority prisoners war West Bank 2015-07-24
sherehan
السابق UN Human Rights Committee Worried about Canada’s Anti-terror Bill
التالي Egypt Begins First Trial Run of the New Suez Canal