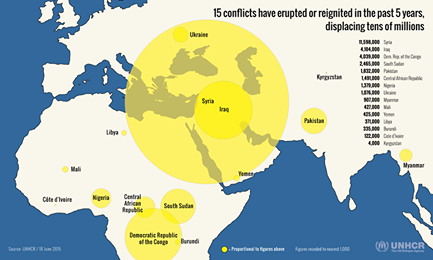 UNHCR : Syria is the world’s biggest source of refugees

On Thursday, the UNHCR released its latest report ” The UNHCR’s annual Global Trends Report: World at War”.  it said that worldwide displacement was at the highest level ever recorded. And the number of people who forced to displaced at 2014 rose to 59.5 million compared to 51.2 million a year earlier. It also showed that over half the world’s refugees are children.

According to the report, the increase represents the “biggest leap” ever seen in a year. And that the situation is expected to get worse. It says that one in every 122 is either a refugee, internally displaced person , or  an asylum seeker.

The report stated that, starting from  2011, the main reason for the increase was the war in Syria. as last year ,Every day about 42500 Syrians  became refugees, asylum seekers, or internally displaced.

The  UN High Commissioner for Refugees António Guterres  said on a press release from the Organization  “We are witnessing a paradigm change, an unchecked slide into an era in which the scale of global forced displacement as well as the response required is now clearly dwarfing anything seen before,”.

According to the report , Middle East and North Africa produced about  19% of the total  number of refugees, asylum seekers, or internally displaced  people . Syria is the world’s biggest producer of both internally displaced people (7.6 million) and refugees (3.88 million at the end of 2014). Adding to the high totals from Syria was a new displacement of least 2.6 million people in Iraq and 309,000 newly displaced in Libya.

The UNHCR report mentioned that, the number of refugees and internally displaced people is on the rise In the past five years globally because of the eruption of  15 conflicts  ,and   there was at least 4 conflicts among them in the  Arab region in Libya, Syria, Iraq, and Yemen.

It also noted that one of the most recent and highly visible consequences of the conflicts is the growth in the numbers of people seeking refuge through dangerous sea journeys, including on the Mediterranean, in the Gulf of Aden and Red Sea.

For more information and details from the report