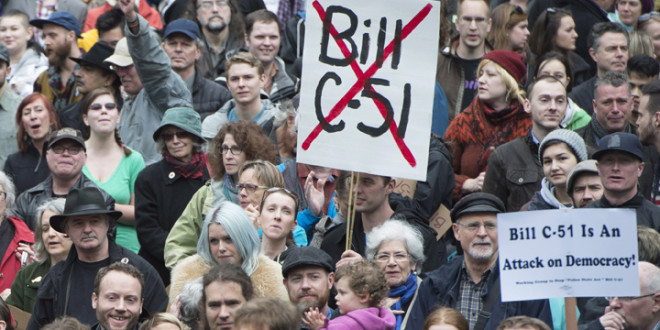 Demonstrators attend a protest on a national day of action against Bill C-51, the government's proposed anti-terrorism legislation, outside the Vancouver Art Gallery in downtown Vancouver, Saturday, March 14, 2015.

The Anti-Terrorism Act, which passed by the Parliament in June, eases for intelligence officers, border guards and law enforcement officials monitoring and arresting potential terror suspects in Canada. The law also could potentially be used to thwart travel plans, cancel bank transactions and covertly interfere with radical websites. Critics say it will make it easier for security officials to place Canadians under surveillance.

The Committee said in  its latest report released  on Thursday that it is concerned that the law grants the government sweeping powers but does not contain enough legal safeguards to protect political and civil rights.

The report said the government should rewrite  the law to ensure it imposes better safeguards so information-sharing doesn’t lead to human rights abuses and puts in place oversight mechanisms for security and intelligence agencies. It also urged the government to ensure the law complies with the UN human rights covenant to which Canada is a signatory.

The law increases the exchange of federal security information, broadens no-fly list powers and creates a new criminal offense of encouraging a terrorist attack. It also makes it easier for the Royal Canadian Mounted Police to potentially restrict the movements of terror suspects and extend the amount of time they can be kept in preventative detention.

The report comes after several civil rights organizations raised it concerns in Geneva earlier this month.

Jeremy Laurin, the spokesman for Public Safety Minister Stephen Blaney confirmed that Canada stands by the legislation. He said “These are reasonable measures similar to those used by our close allies to protect their own citizens”

The report raises several issues, including the lack of a national inquiry into murdered and missing aboriginal women and the human rights record of Canadian mining companies operating abroad. The report also details concerns about pay equity, prison conditions and the detention of immigrants.