أخبار عاجلة
الرئيسية » أخبار عاجلة » The Travelers of Al-Andalus, Ibn al-Shaykh and the lighthouse of Alexandria 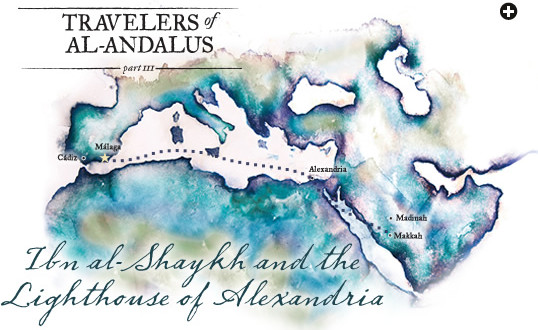 The Travelers of Al-Andalus, Ibn al-Shaykh and the lighthouse of Alexandria 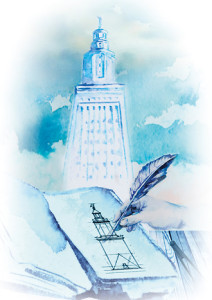 Ibn al-Shaykh’s Arabic manuscript, Kitab alif ba (or Book of A and B) was discovered in a Cairo library only in 1870, and it took another 60 years until the Spanish Arabist Miguel Asín Palacios recognized its true importance. It had been written not as a travel account at all, but rather as a teaching tool for Ibn al-Shaykh’s son, comprised of the jottings of random ideas and miscellaneous facts suitable for a child student. But buried within it, Palacios discovered the most precise description and measurement of the lighthouse of Alexandria that was ever made by an eyewitness before its toppling in 1323 by an earthquake.

Alexandria had always held allure for travelers from Al-Andalus who sought broader knowledge, as it was often their first port of call after leaving home, and it attracted scholars from the Islamic East who could offer teaching in subjects under-studied in the Arab West. One of these scholars was the Persia-born Abu Tahir al-Silafi, an expert in hadith, or the oral transmission of the sayings and practice of the Prophet and his Companions, from whom Ibn al-Shaykh took lessons—possibly within sight of the lighthouse.

In the context of the customarily rigorous analysis of hadith, it must have weighed on these scholars that so much unexamined legend, myth and outright exaggeration had accreted to the lighthouse itself, without any systematic effort to separate fact from fiction. 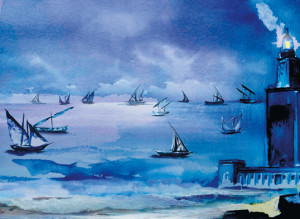 Some stories had said that the lighthouse was more than 650 meters high; that its marble cladding was so bright that a tailor could thread a needle by its light at midnight; that its beacon could be seen almost as far as Istanbul; or that it cost 23 tons of silver to build—almost twice the cost of the Parthenon in Athens.

Many of these legends were retold by the leading classical authors, including Pliny, Strabo, Lucian, Josephus, and the second-century ce Alexandrian Achilles Tatius, who described it as “a mountain almost reaching the clouds, in the middle of the sea.” Other unlikely stories were repeated by the usually more reliable Arab and Persian geographers: Al-Yaqubi in the ninth century, Al-Masudi and Ibn Hawqal in the 10th, Al-Yaqut in the 11th, Al-Idrisi in the 12th and, even in years after Ibn al-Shaykh’s visit, Al-Qazwini in the 13th and in the 15th Muhammad ibn Abd al-Mun’im al-Hamyari in his Kitab al-Rawd al-Mu’attar, or Book of the Fragrant Garden. Al-Shaykh, it turned out, was nearly alone with the facts.
Ibn al-Shaykh started by noting its exact location: “Between the Lighthouse of Alexandria and the city there is a distance of nearly a mile or more. The city is to the south of the Lighthouse. This is located on a small island amidst water, and from here, a road above the water has been built to reach the shore, whose length is 600 cubits or more, its width 20 cubits and its height above sea level 3 cubits. Therefore, when the tide is high, water covers this walkway…. The Lighthouse rises at the far end of the island.”We know little of Ibn al-Shaykh’s life. One thing we do know comes from the Moorish biographer Ibn al Abbar, in his encyclopedia of notable men of Al-Andalus, the Takmila. Ibn al-Shaykh, he wrote, was an architect and a builder who erected 25 mosques and sank 50 wells in his native Málaga. So it is not difficult to imagine Ibn al-Shaykh leaving his books behind to climb the staircase of the lighthouse, measuring rope in hand, to examine the lighthouse from below, above and inside. 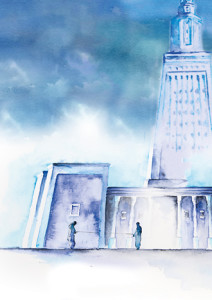 That the words were faded would be no surprise, as the inscription had weathered more than 1,400 years of salty sea breezes. Dedicated to the lighthouse’s builder in 297 bce, it was ordered by Alexander’s general Ptolemy i and finished 12 years later by his son Ptolemy Philadelphius. Although Ibn al-Shaykh could not read it, an earlier visitor had recorded it. Translated from Greek it read:  “Sostratus the Cnidian, son of Dexifanos dedicates this to the savior gods on behalf of those who sail the seas.”The base, he wrote, was formed by a square that measured 45 steps on each side: “Sea waters lashed often the platform that surrounds the building by its east and south sides. Between the building and the wall [which enclosed the platform] there are 12 cubits.… The building’s foundations are on the rocks, under water…. This wall is built very steadily, as if only one piece due to the tight juncture of the limestone stones … the inscription is on a wall of white stone looking to the sea … with only the shapes of letters, set in hard stone, long and black … still visible.”

Ibn al-Shaykh next described and counted the 68 doors and rooms he entered while ascending the ramp from the first floor gallery, as well as its total height: 53 fathoms, plus nearly seven substructures. He was attentive to every dimension: “I wrote down all this on-site, since I went to the Lighthouse with the inkwell, and paper, and marked cord, so as not to lose even the smallest detail, for the Lighthouse is a wonder.”

Then he described the shapes of the tower’s three tiers: at the base, square; in the middle, an octagon; at the top, a cylinder. On top was a small mosque, said to have been built by one of Egypt’s first great Muslim rulers, Ahmad ibn Tulun, on the upper flat roof: “Four doors give entrance to it, as if it were a dome.” He added that the wood fire of its mirrored beacon was still lit, as in Greek and Roman times, on this upper part in order to guide boats into the harbor. 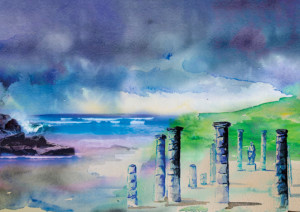 An added motive for Ibn al-Shaykh’s fascination with the lighthouse was likely something that had recently befallen a similarly legendary lighthouse less than 100 kilometers from his hometown. In Cádiz, a famous lighthouse, reputedly of Phoenician origin, had been destroyed in 1145—20 years before Ibn al-Shaykh’s pilgrimage. It had been felled by the Almoravid admiral Ali Ibn Isa Ibn al-Maymoon as a last desperate act before he deserted his post to join the invading navy of the conquering Almohads, who commanded that it be leveled in order to steal treasure that was rumored to be buried beneath it.

The 12th-century Granadan geographer Muhammad ibn Abu Bakr al-Zuhri, who lived to see the destruction of this lighthouse in Cádiz, described it as a three-level, squared-off construction topped by a statue of a man facing east, as if looking out across the sea to meet the gaze of the far more famous, six-meter statue of Poseidon leaning on his trident atop the Alexandria lighthouse. 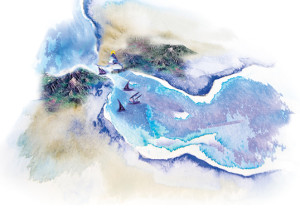 When in 1165 Ibn al-Shaykh took such a great interest in the Alexandria lighthouse, was he perhaps thinking of the one that his countrymen had lost just 20 years earlier? Was he also making the case for the conservation and protection of Alexandria’s, which was already in poor condition? And was he implicitly criticizing the Almoravids for having demolished it? It is fair to speculate that the reason Ibn al-Shaykh made such a detailed description of Alexandria’s beacon was to remind his friends at home of what they had lost in Cádiz.Al-Zuhri’s description lacks all specificity, but in the eyes of a reader of his day it could not help but call to mind the anonymously and contemporaneously writtenDescription of al-Andalus, which praised Cádiz’s pre-Islamic architecture by saying, “The whole city had also wonderful ancient remains which have not been altered by the passing of time. These vestiges testified to the city’s power and the existence of a great kingdom.” After al-Maymoon’s wanton act, the city certainly had been altered for the worse, and as an architect and builder, Ibn al-Shaykh knew it.

For two centuries after Ibn al-Shaykh’s visit, the lighthouse of Alexandria was still in use for its function in the seaport was essential. Boats were controlled and guided from it, and their sailors, frightened after often hazardous journeys, felt relief in their hearts after glimpsing it, as we know well from written testimonies.
Although the lighthouse, called in Arabic manarah (place of fire that is used for illumination), ceased to exist, it has remained present in the West not only through historical memory but also generically through the word “minaret” in English and its French and Spanish equivalents, minarete and alminar. Thanks to Ibn al-Shaykh’s description, we can envision it as it stood, a beacon for both navigation and imagination.Ibn Battuta of Tangier, who visited Alexandria in 1326, just three years after the earthquake that toppled it, pointed out that already “one of its façades was in ruins.” When he visited the city again in 1349, “it was such a total heap of rubble that it was not possible to get into it anymore, nor even to go up to its door.” It was replaced by a small watchtower that stood until 1480, when the Mamluk Sultan Qayt Bey built over its ruins a fortress to which he gave his name, and which still guards the harbor to this day.

Maria Jesús Viguera Molins, Ph.D., is a member of the Royal Academy of History in Spain and on the faculty of Madrid Complutense University. Louis Werner (wernerworks@msn.com) is a writer and filmmaker living in New York.Belén Esturla (esturlaruiz@gmail.com) is an artist and illustrator in Granada, Spain.