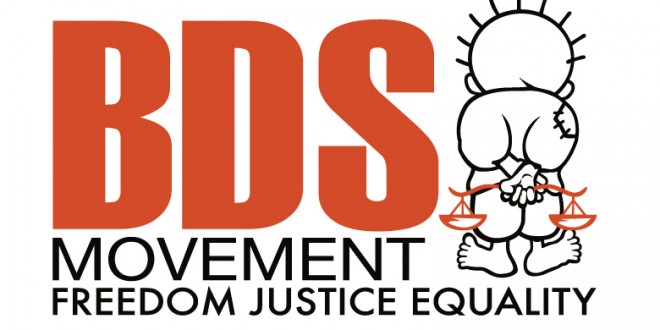 BDS is a ” global movement for a campaign of Boycott, Divestment and Sanctions against Israel” which aims to force Israel to comply with international law by using   non-violent punitive measures,like the boycott against apartheid in South Africa. It was initiated by Palestinian civil society in year 2005, and coordinated by the Palestinian BDS National Committee (BNC), which was established in 2007. BDS is a strategy that allows people to play an effective role in supporting the Palestinian cause by ending occupation and colonization of Arab lands and demolishing the barrier Wall, recognizing the rights of the Arab-Palestinian citizens of Israel and by respecting the rights of Palestinian refugees to return to their land as mention in UN resolution number 194.

The BDS Movement’s presence in both North America and Europe is gradually increasing thanks to the support of the Palestinian Campaign for the Academic and Cultural Boycott of Israel (PACBI) and its partners in North America and Europe. According to the National Council of the American Studies Association (ASA), the academic boycott of Israel and the Boycott, Divestment and Sanctions (BDS) movement have had an increasingly large presence in college campuses and academic associations. Currently, the Israeli government considers the movement as a strategic threat, with the US Government describing it as an “existential danger” to Israel.

In 2013, there was plenty of support for the movement from North America, especially the academic boycott. It started with the University of Hawaii’s Ethnic Studies department, which became the first academic department in the West that supported the boycott of Israel. In April, the Association for Asian-American Studies endorsed the academic boycott, thereby becoming the first professional academic association in the United States to do so. This year, student councils of several North American universities, including the University of California, Berkeley, called for divestment from companies profiting from Israel’s occupation.

Additionally, the ASA recently endorsed a boycott of Israeli academic institutions because of the U.S. military support for Israel, Israel’s violation of international law and UN resolutions and due to the effect of Israeli occupation on Palestinian scholars and students – Israeli institutions of higher education are among the organizations that violate human rights. The ASA is the third major U.S. academic organization that has taken this step.

In Canada, University workers in the Canadian Union of Public Employees passed a motion calling for an academic boycott of Israel in February 2009. Academics also vowed to pressure their academies to break financial relationships with Israel.

In North America, students are working on supporting campus divestment initiatives, with student unions in Regina and Carleton in Canada, the National Movímíento Estudíantíl Chícan de Aztlán (M.E.Ch.A), the largest association of Latin youth in the US, and the student government at University of Massachusetts-Boston all voting to support divestment and other BDS initiatives. Additionally, a student-led BDS U.S. national conference was held at the University of Pennsylvania earlier this year, following a successful national student conference at Columbia University last year.

Europe has also played its part in the Academic and Cultural Boycott of Israel. The British University and College Union (UCU) in 2010 voted to boycott the AUCS, an Israeli colony-college in Occupied Palestinian Territory, and relations with Histadrut, the racist Israeli labor body that supports Israeli apartheid policies. The National Union of Students in the UK endorsed student campaigns that ended relationships between universities and Ahava and Eden Springs.  Additionally, Edinburgh University Student Association voted to end its contract with G4S.

Academic boycott campaigns are now active in France, Spain, Italy, and others countries in Europe as well.

The BDS movement is also spreading by financial boycott in Europe. This year, the European pension funds stopped dealing with banks and companies that benefit from the settlements. In January, PGGM, one of the largest pension funds in Netherlands, decided to boycott five of Israel’s largest banks because they financed companies involved in the construction of settlements. In the same month, two of Europe’s largest financial institutions, Nordea and Danske Bank, agreed to boycott Israeli banks which operate in the West Bank. Additionally, Norway’s Government Pension Fund has blacklisted Africa Israel Investments and Danya Cebus for working in settlements in West Bank.

In May, a Deutsche Global Financial Bank stopped dealing with Elbit Systems, the Israeli arms company that supplies the Israeli military and provides components for the barrier Wall. One of the largest Swedish pension funds, Foersta AP-Fonden, the Norwegian insurer KLP and Danish financial watchdog Danwatch have all taken similar decisions. Currently, European markets are labeling Israeli goods made in the West Bank.

Richard Falk, Special UN Rapporteur on the Occupied Palestinian Territories final report to the United Nations, called on the international community to investigate business activities of companies and financial institutions in their countries which profit from the settlements in Israel and other unlawful Israeli activities. He encouraged entities to “take appropriate action to end such practices and ensure appropriate reparation for affected Palestinians.” He also added that “member states should consider imposing a ban on imports of settlement produce”. Last August, US Secretary of State John Kerry warned that Israel could face a boycott campaign if it continues to build settlements in the occupied West Bank.  Maariv, the Israeli newspaper, reported that the international boycott cost it almost $30 million.

Although the support for the BDS continues to increase, there have been campaigns to pass anti-BDS legislations in Israel and in the United States. In 2011, the Knesset passed an anti-boycott law that sanctions anyone who declares a commercial embargo on Israel, and considers boycott a civil offense, subjecting its initiators to litigation. Several Israeli and US human rights activist have said that the law should be cancelled. Furthermore, a special panel of the Israeli High Court of Law held a hearing on the bill.

Anti-boycott legislation had been introduced earlier this year in both New York and Maryland to punish institutions that support the boycott. They were withdrawn after being criticized by educators, who said that they were an attack on academic freedom. However, a revised version of the New York bill has been introduced, which might punish educational institutions that use public funds for activities which support boycotts of Israel. In March, the Protect Academic Freedom Act was introduced in the House of Representatives – it would deny government funding to any U.S institution that endorses the academic boycott of Israel.  Other bills have been introduced in several state legislatures to penalize universities if their members participate in organizations that support the boycott.

More than 150 scholars and others have signed a statement recognizing that boycotts are an “internationally affirmed and constitutionally protected forms of political expression”. Some universities, like Northeastern University, have banned groups like Students for Justice in Palestine (SJP) from campuses, and threatened to take measures against their members.

The BDS has, for almost a decade, been fighting for the Palestinian cause and drawing support against the injustices committed by Israel. Their three-pronged approach has been wildly successful so far, and will hopefully see Palestinians get the justice they deserve one day.