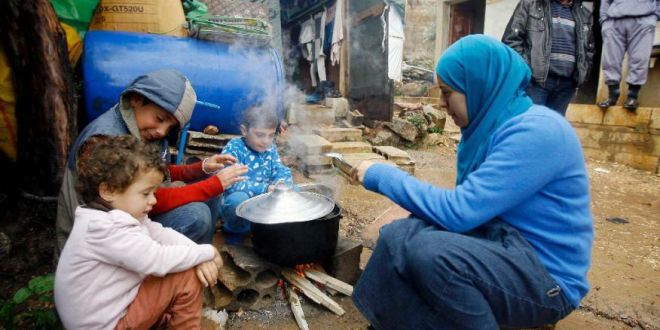 Aid workers in the Middle East fear that they are on a verge of a major humanitarian crisis as millions of Syrian refugees will be cut off food assistance due to funding gaps.

On Monday, the UN World Food Program said that it needed $64 million to fund its food voucher program for the month of December alone, and that “many donor commitments remain unfulfilled”. The UN’s announcement comes in the midst of winter preparation for several aid groups, particularly in informal camps in cold, mountainous regions.

“It’s going to be a devastating impact. This couldn’t come at a worse time. We’re trying to get everyone prepared for winter and if you look at the conditions particularly in Lebanon in some of these informal settlements, the conditions are already very bad. We’re doing everything we can… to keep their shelters at least warm and as dry as possible. But you can be warm and dry, but if you don’t have food, you’re in big trouble”, Ron Redman, regional spokesman for the U.N. refugee agency UNHCR, said.

The World Food Program’s food vouchers are providing aid to nearly two million refugees scattered in different countries in the Middle East. The refugees receive a card each that is topped up with money every month – the amount varies with every country, but is enough to buy 2,100 calories worth of food every day.

However, for most refugees with the card, December’s top-up has not arrived yet. Refugees in Lebanon have been the worst-hit by the crisis – the country hosts 1.1 million Syrian refugees, with around 800,000 of them supported by food vouchers from the World Food Program.

It is estimated that around 450,000 refugees will get no money in December; the 90,000 living in the UN’s Azraq and Zaatari camps are, however, expected to receive aid.

According to the program’s Regional Emergency Coordinator Muhammad Hadi, Egypt and Turkey have funds to provide food until December 13th.

“It’s going to be a nightmare for refugees. Those people are depending on the WFP to feed them, most of them are totally dependent on us. They have no income”, Hadi said.