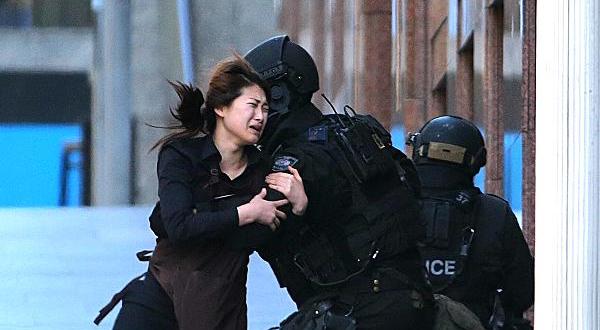 An Iranian-born gunman and two hostages were killed as heavily armed Australian police ended the day-long hostage situation created by the gunman on Tuesday.

The man, described by Australian media as a “self-styled sheikh”, took 17 people hostage at a central Sydney café before he was taken down by the police.

Police hurled percussion grenades before opening fire, after several customers and café staff managed to flee. They moved in on the 50-yaer-old “lone gunman” and killed him, New South Wales Police Commissioner Andrew Scipione said at a media conference.

A 34-year-old man and a 38-year-old woman were also pronounced dead after they were taken to a hospital.

“It was the act of an individual. This should never destroy or change the way of our life”, Scipione said.

Additionally, Royal North Shore Hospital had admitted a 39-year-old policeman with a gunshot wound and a woman in her 40s who was shot in the leg – according to a hospital spokesperson, she is now in stable condition.

ABC television and other media outlets named the Iranian-born “cleric” as Man Haron Monis, and said that he was out on bail for several violent offences. The Monis’ family lawyer Manny Conditsis said that the hostage situation was the work of an individual and not an extremist group.

“This is a one-off random individual. It’s not a concerted terrorism event or act. It’s a damaged goods individual who’s done something outrageous”, he told broadcaster ABC, which described Monis as a “self-styled sheikh”. They also reported that he had sent offensive letters to relatives of dead soldiers and was out on bail on charges of being an accessory to the murder of his ex-wife. It added that he arrived in Australia in 1996 as a refugee, lived in southwest Sydney and was “understood to be a fringe Islamist”.The police declined to reveal the gunman’s identity, but denied reports that named Man Haron Monis as the gunman.

Tehran immediately condemned the incident – “Undertaking such inhuman acts and provoking fear and panic in the name of merciful Islam is not in any way justifiable”, IRNA news agency reported foreign ministry spokeswoman Marzieh Afkham saying.

Man Haron Monis was also seen waving an Islamic flag bearing the shahada, or profession of faith in Arabic script – “There is no God but Allah; Mohammed is his messenger.”

Over 40 Australian Muslim organizations jointly condemned the incident and the flag’s use, saying that it was used by “misguided individuals that represent no one but themselves”.