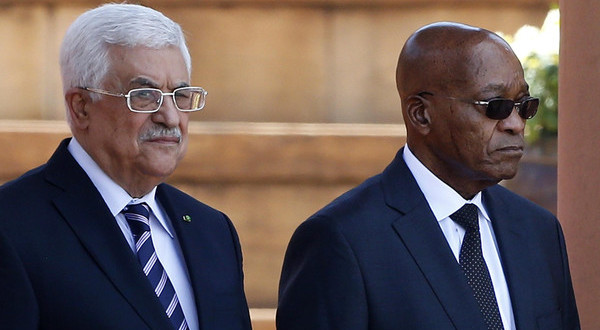 South African President Jacob Zuma on Wednesday said that Israel is defying global powers and “undermining” the prospects of a two-state solution to the Israeli-Palestinian conflict by continuing with its settlement policy on occupied territory.

“The reality is that the overwhelming majority in the world agrees with the position of two states living side by side in peace, but we have a problem of a country that is defying all of that. We reiterate our call for the total cessation of all settlement activities”, Zuma said in a joint press conference with visiting Palestinian President Mahmud Abbas.

Zuma also criticized how the United Nations on the way it works, saying, “I don’t think the system should allow that one country can defy the world”.

He also added that South Africa was ready to help with negotiations between the Palestinians and the Israelis, and has appointed special envoys for the task.

Abbas said that Palestinians sought to get help from South Africa’s “successful experiences” in building an independent nation.“We are the last nation in the world that is still living under occupation”, he said.

Zuma’s African National Congress, the ruling party in South Africa, is a key supporter of the Palestinian cause, with party members regularly comparing Israel to their erstwhile racist apartheid state. While the white minority government co-operated with Israel, Nelson Mandela, after becoming the first democratic President in 1994, pledged to support the Palestinians, saying, “South Africa’s freedom is incomplete without the freedom of the Palestinians”.

Abbas was welcomed with the 21-gun salute at the Union Buildings in Pretoria. While he has visited South Africa before, this was his first state visit.

“People of South Africa and Palestine have a strong bond built in the trenches of our two struggles, we want to build even stronger relations and cooperation based on that historical relationship”, Zuma said.