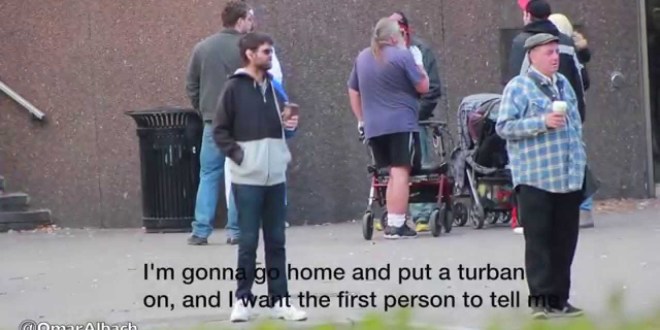 A social experiment in which a Canadian actor posed as an Islamophobe ended with the actor getting punched, suggesting the generally tolerant environment in Canada despite isolated racist abuse after the recent terror attack in Ottawa.

Director Omar Al-Bach conducted the social experiment in Hamilton, the home town of Corporal Nathan Cirillo, the victim of the Ottawa attack. Two actors play “Devin”, an outspoken racist, and “Zack”, who is dressed like a Muslim in a traditional kaftan and a white skull cap.

Members of the public can be seen standing up for Zack in the video, with one person even ready to punch Devin after Zack accused him of being a potential terrorist.

The video was uploaded 24 hours ago, and has since gained well over a million views the filmmakers were even invited to Canadian channel Global TV to talk about the experiment.

In the film, the actors stand at a bus stop, when Devin asks a bystander, “Are you planning on taking a bus? I suggest you take another ride”.

The man defends Zack, saying “You can’t stereotype and judge people by their clothes. Or their nationalities or anything else. What happened there [in Ottawa] was an incident of fanatics. Everybody cannot be punished like that. I’m sorry, but this is a friend of mine. I’m with him too; true Muslims do not believe in that sh*t, it’s fanatics, it’s crazy people”.

To provoke the man, Devin argues that Zack “could be armed with explosives”. However, the bystander responds by saying, “so could I!”

Devin later tries to escort Zack from the bus stop, when bystanders ask Devin to leave and warned him that they would call the police.

Devin accuses Zack of “looking like a terrorist”, to which a woman responds by saying, “f*** you man, what the hell?! Why would you call him a terrorist just because he’s dressed like that?”