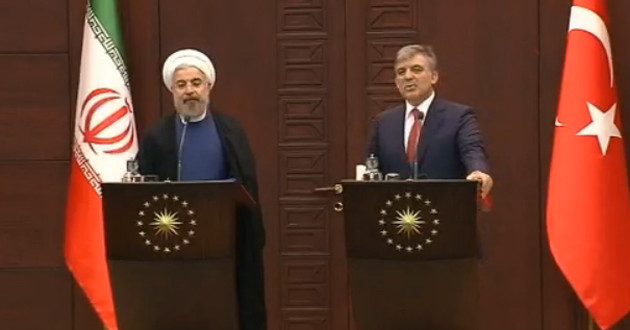 Turkey and Iran on Monday pledged to stop bloodshed and extremism in the Middle East by working together, despite their differences over the civil war in Syria.

In a news conference in Ankara, Iranian President Hassan Rouhani said, “Iran and Turkey, the two important countries in the region, are determined to fight against extremism and terrorism”. He added that the lack of stability in the region benefits neither Iran and Turkey nor the world.  Abdullah Gul, the President of Turkey, commended Rouhani’s policies after he became President last August, and said that they have helped Iran open up to the international community.

Rouhani was flanked by a delegation of Iranian businessmen and ministers on his trip to Turkey. The trip saw ten bilateral deals signed in several sectors, some of which were finance, culture, communications and tourism. Turkey and Iran are also set to chair the first meeting of a high-level cooperation council Turkey has established with its neighboring countries to promote regional integration and trade.

The mutual diplomatic admiration however glossed over the complicated and often dysfunctional relationship between Iran and Turkey. The ties between the two have taken a bitter turn recently, especially due to the increasing competition between Shiite and Sunni Muslim powers in the Middle East. Turkey and Iran support opposing sides in the Syrian civil war, with Iran backing the pre-dominantly Shiite regime and Turkey backing the opposition.

Last week, Rouhani had congratulated Assad on his victory in the Presidential election, in a vote deemed as a “farce” by the West. Turkey also blasted the vote, calling it “null and void”, and saying that it was “out of the question to take them seriously”.

Rouhani asserted that the visit “will undoubtedly be a turning point in the two countries’ relationship”.
This is the first time an Iranian President has visited Turkey since Mahmoud Ahmadinejad made a “working” visit to Istanbul back in 2008. The last official Presidential visit was made by Hashemi Rafsanjani in 1996.