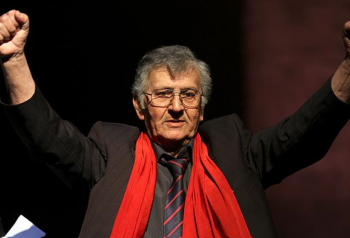 Well-known Palestinian poet Samih al-Qasim, known all over the Arab world for his nationalist writing, passed away on Tuesday after his battle with cancer. 75-year-old Qasim died in the Safed hospital in northern Israel, Issam Khuri, a family friend said, after suffering from liver cancer for the past three years.

Qasim was best known for nationalist poetry in which he defends the identity and rights of the Arab minority in Israel. Known as a “resistance poet”, Qasim’s poems were embraced all over the Arab world during the struggle against foreign conquests, with many of them being translated into several languages, including English.

Qasim was a contemporary of Mahmoud Darwish, also from a village in what would later become northern Israel. The two of them were among the greatest poets in the Arab world. A member of the Israeli communist party, Qasim was arrested several times for his political beliefs. Qasim also worked as a journalist – he was the editor-in-chief of Kul al-Arab, an Arab Israeli weekly. He also published over 60 books in different genres, including poetry, stories, articles, drama and translations.

“I have no love for you, death, nor do I fear you. But you are making a bed of a body and a blanket of my soul”, he wrote last week.

“Samih Al-Qasim, a poet with a grand national voice, has passed away after a life full of giving which he mostly dedicated to defend truth, justice and land”, Abbas stated.

The PLO Executive Committee also mourned his loss, saying in a press release, “The great poet, whose name was associated with the revolution and resistance poetry, devoted his life for defending the Palestinian national culture against distortion and obliteration attempts, serving as a mouthpiece for the Palestinian people’s pains, suffering and resistance against the Israeli occupation”.