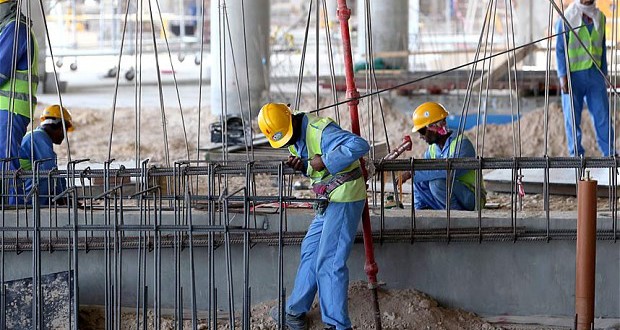 (WPS) The Wage Protection System   is a Qatari new Labour Reforms aims to ensure that migrant laborers, will receive their pay on time.

Under the new system , workers will be paid twice a month or monthly, and the payments  will  be electronically and directly  transferred to their bank accounts. As Failure to pay salaries on time, especially for blue collar workers, has been one of the biggest complaints voiced by rights groups against companies in the energy-rich state.

An academic study released in 2013, “Portrait of Low-Income Migrants in Contemporary Qatar,” found that around 1/5 of migrant workers were “sometimes, rarely or never” paid on time.

On August 18, a six-month grace period for businesses to ready for the electronic payment system expires. From that date, companies which fail to pay staff on time could face fines of up to 6,000 Qatari riyals (1,650$ ), will be banned from recruiting new staff, and bosses potentially sent to jail. Inspection teams will monitor the new system and identify any firms not complying with the regulations.

The  new Reforms  are being overseen by the labor ministry, and previously it pointed to its introduction as a “proof of Qatar’s commitment to labor reform”.

In May, the ministry cited the WPS as an example of the “significant changes” being introduced in response to furious criticism of its labor practices since the decision to allow Qatar to host football’s biggest tournament.