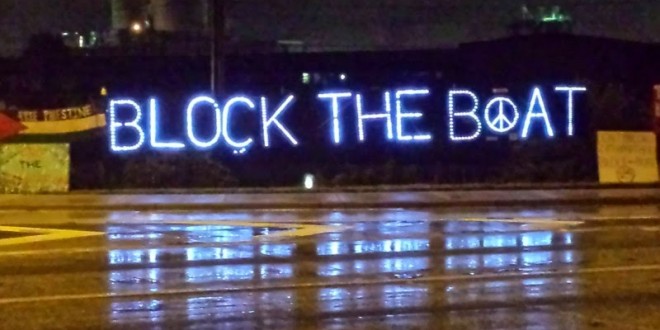 Around 70 social justice activists last weekend protested at the intersection of Maritime and 20th Street at Tampa, Florida against the docking of Israeli shipping company ZIM’s vessel Alabama.  They then marched to the port itself and successfully stopping the docking of the ship.

Their actions were a part of the Block the Boat movement, which aims to put economic pressure on Israel by opposing the import of Israeli goods, made in occupied territory and by exploiting under-paid Palestinian labor. The movement is a part of the larger Boycott, Divest and Sanction (BDS) campaign, which protests the oppression and the killing of Palestinians.

“It was really great to see dockworkers showing interest and support for our cause. There was a real sense of solidarity from the workers themselves”, Caroline England, a member of the Tampa Students for a Democratic Society (SDS) said.

“Every little action on our part counts. The BDS movement was integral to the destruction of the South African Apartheid regime and can play a similar role in dealing with Israeli apartheid today – whether it be not buying Sabra hummus, HP computers, or attempting to stop a boat containing Israeli goods from docking. Each action moves towards the ending of the Israeli occupation of Palestine”, Sam Beutler from the Students for Justice in Palestine at the University of South Florida said.

According to the BDS, the movement is a part of a new campaign which is working on cooperation between pro-Palestinian groups and dockworkers in American cities which have ports, both on the east coast and the west coast.
American activists have organized similar protests at ports in Tacoma, Washington and Oakland, California. On August 30th, the ZIM Alabama had docked in Tampa, which had also drawn a protest. A third protests is in plans to oppose the ZIM Alabama’s return.